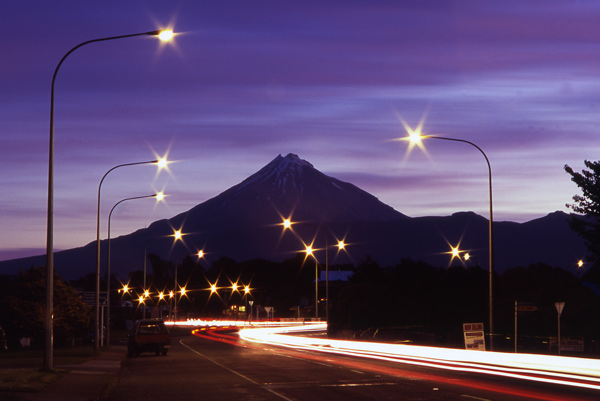 This is the DECEMBER image from our Taranaki: The mountain 2011 calendar, which celebrates Mt Taranaki’s hold on the local landscape. South Road is the main artery to western Taranaki, a fairly unpopulated district but one full of possibilities for the keen photographer.

In early summer the last of the season’s snow was receding on the tops, roughly 27km away. Digital was my first preference here, but for all its merits as a low-light camera the Lumix LX3 stops at a standard setting (60mm equivalent), so I resorted to my trusty Pentax SP F (Suva, June 1974) and of course a tripod.  A 100mm lens was used to flatten perspective and bring in the peak; the 200mm lens was even better but that shot was spoilt by camera shake.

Then it was game over, as the peak became too dim for the purpose.  Twilight at this latitude (39 degrees south) gives a balanced light for these compositions for only a short time, although in summer the interval is a little longer. Exposure not recorded but roughly two minutes at f16, on Fujichrome slide film. The number of points on the starry lights indicate how many blades are inside the lens, according to Ken Rockwell (www.kenrockwell.com) – something I’d never even considered.  This photo gets a range of reactions; it’s quite captivating to some, but seems a little contrived to other (sophisticated?) eyes – the variety of comment on a single photo can be really surprising. We have also published this image as a greeting card.