21. Wind-blown trees and a long exposure by moonlight 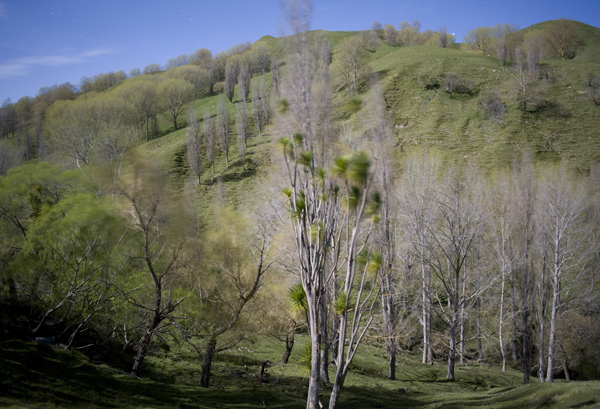 A layby gave this uncommon mid-tree vantage point on a cabbage tree fronting poplars and other deciduous trees, some freshly in leaf. This scene has quite likely featured in numerous local camera club showings, but by moonlight it was a novel prospect to me. Here, though, the wind was positively howling up the gully, in stark contrast to the earlier sheltered calm above Waimarama. In this 15-second wide angle exposure all the cabbage leaves are animated except for the lower, leeward bunch, while the nearby willow is also a blur of green.

A high viewpoint like this is good for getting such long slender forms, as they are otherwise  hard to take in, especially if you want a background other than sky. Although the 28mm lens is less effective in conveying a sense of depth – the slope before me was very steep – only a wide angle could scope this landscape. It also resolved focus problems (even wide open) after some initial difficulties getting a good bead with the telephoto (85mm). Gusts of wind were no help.

The daylight effect is deliberate, but a few stars in sight reassure us that this really is moonlight photography. The contours were engaging while the tree forms were enchanting, even in the dimness. The distant dots of white were sheep at rest. As I was in need of some myself, I didn’t take as long at this outlook as I should have. I must remember to check each frame more carefully, as other photos from here revealed unexpected patches of erosion and had to be disqualified. f2.8 at ISO 2000.