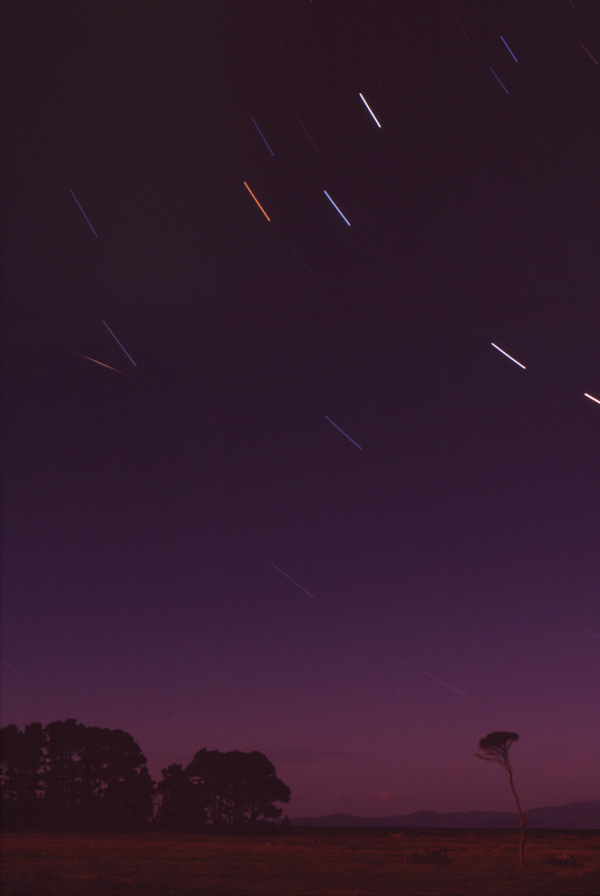 Stars are suppressed by moonlight because they are competing with a brighter sky.   Nevertheless, while out with friend Richard one clear night at the base of Farewell Spit, I  dedicated roughly 15 minutes to placing the lone manuka against a moonlit sky. The starry arc is identical to that seen in 46. Bullock Creek – meaning we’re again looking east, this time towards the northernmost Albel Tasman National Park.

People are always surprised by the variation in star colours, while the meteorite flash was unnoticed at the time. The glow across the bay I can’t explain, but there’s a general shift to warm colour here, made clear by the “normal” colours that Richard got at the same time on his digital Canon. It’s an innate tendency of all film to “go off” on the B setting; Fujichrome is usually less susceptible than Kodak, but not here. However I find the effect quite moody and acceptable.

A note in my camera bag recommends (with the 85mm lens) 10 minutes at f16 for star trails, at ISO 200. For film f11 might be better, as it slows up with long exposure. A standard lens was used for this picture but a longer lens often gives better results, as focussing is not so fussy at these smaller apertures.

After 5 to 10 minutes film has a real advantage over digital – especially if, like my old Pentax, your film camera operates without a battery (light metering excepted). Extended exposures are a serious strain on digital battery power. Also, once the exposure is done there is no dark-frame waiting around either, the post-processing noise-reduction interval usual in digital cameras.

The 24×36 frame here looks too long and narrow to me. So often this is a hard proportion to use well in vertical compositions; they only really work with good vertical lines. The Lumix LX3 has three format options, including the TV screen 4:3. I’d love cameras to have square and oval options too!