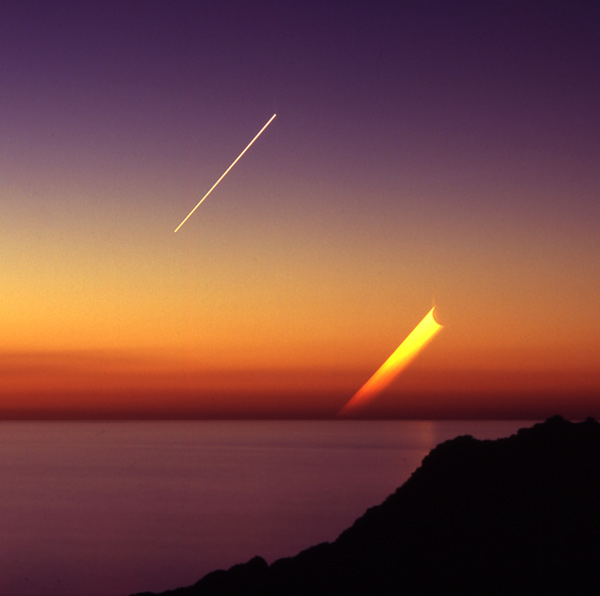 This took around 15 minutes at a small aperture, on Fuji slide film. It was a perfect summer’s evening at Paritutu Centennial Park, and I spent the interlude chatting with a friend. I’m only guessing that the stripe is Venus, but as she often accompanies the early moon it’s a good bet.

For trails like this I suggest a crescent moon and a long lens – the longer the better. Crescent moons set soon after sunset, so good colour on your horizon is likely. However to get such a long exposure and the moon suitably bright in the sky, the evening must be darker than it seems here. So moonset cannot be too close to sunset; about an hour between the two seems to work best.

We were fortunate to have such a warm and still night, as they are uncommon at this exposed outlook. In winter the same effect can be achieved with the waning moon rising just before dawn, but you’d be looking the other way, and without the balm we enjoyed. For the duration you could of course retire to your car and thermos; it’s really a case of when you prefer to be active and outdoors, but I’m an owl myself, not a lark.

The silhouette is of Snapper Rock (Motuotamatea), a semi-tidal island occupied by the old-time Maori. It’s not a brilliant outline but nothing else was available from the vantage point. Sometimes for these long-tail compositions a simple horizon will suffice, especially if there is texture below. However for my own I like to add a silhouette to the foreground or near distance, as having a black shape helps give depth and provides extra contrast.

Just like the sun, as it nears the horizon the moon colours up, as its rays pass through the atmosphere at an increasingly oblique angle. Here however thin low cloud in the far west has softened the effect.