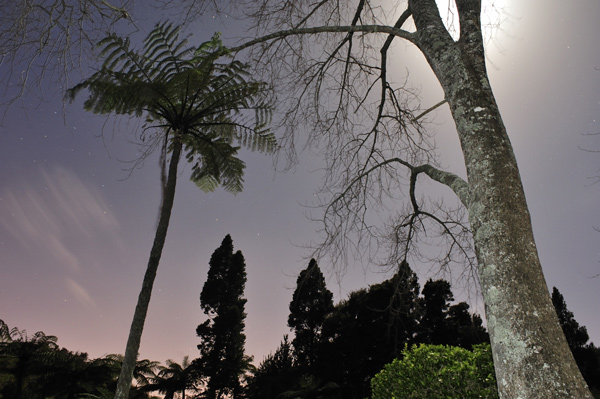 The greater the contrast, the greater the potential. Great energy only comes from a correspondingly great tension between opposites. –  Carl Jung

“Contra nuit” adapts the French term contra jour, meaning against-the-light effects, to this special application by full moon. I’ve tried it here from the safety of the broad shadow of a poplar, as I am no great fan of lens flare despite its creative possibilities. To add some extra colour and texture I then lit the trunk hiding the late-rising moon with the camera flash. This highlight combines well with the mid-distant silhouettes.

Even with short exposures the tripod soon had to be moved to stay in shadow, such is the steady arc of the moon across the sky. The pink is suburban glow; cloud was frequent but fairly light until midnight. In outline beyond the ponga fern are kauri rickers, growing 150 km south of their natural range.

The night was mild and pleasant; in my hollow there was very little wind and the muted  soundtrack was punctuated only by an occasional screech from nearby pukeko (swamphens). From home I had walked 25 minutes in gumboots (wellingtons) to just beyond the city, with tripod and gear slung on my back. Everything was wet and soggy – and I had to roll under an electric fence – but gumboots were the right choice and I did not feel the damp.

The quote relates to my earlier struggle to decide whether to fight fatigue and go out on a marginal evening – after an energetic moony night before – or relax and stay home; whether to take the ailing car or just walk the distance, for a more singular experience. Then the evening cleared unexpectedly and from our front lawn I saw the rising moon; the  wind gusts had dropped away and my decision was made. Instead of a quiet night at home I had a great time out in fresh pastures.