17. A grove in early spring, and a moonlight metaphor 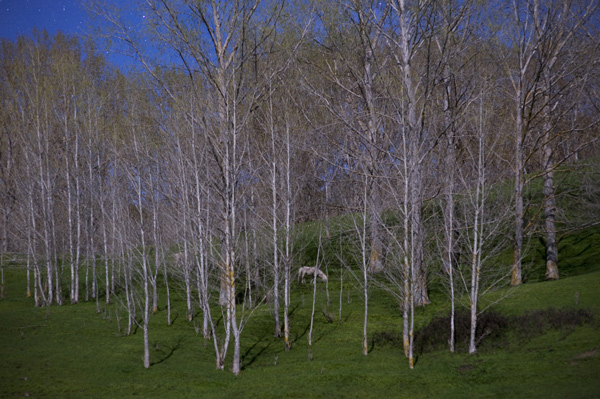 Chasing the full moon in Hawkes Bay recently, I saw this scene on the Waimarama road and circled back. A pretty stand of European trees is not such a common sight by New Zealand highways, and in their new leafage these looked promising. It took a while to spot the lone horse grazing within (and only later did I see the second). By moonlight the effect was striking and quite dreamy, but unfortunately the leggy girl with the long blonde hair must have had the night off…

Alas, how different my white stallion looked the following night when he came down to the fence; on this second stop we saw instead a small and somewhat scrawny pony – one of a number, it turned out. In a metaphorical mood, I remarked to Gerry that moonlight is to ponies what candlelight is to people. Where moonlight draws a veil, daylight reveals all. Such surprises showed up in other photos from that night – an unseen curve of tarseal here, an erosion feature there – but these are only minor bugbears for moonlight photography; a bigger issue is just getting the frame properly focussed.

Of my numerous shots here, only this one is halfway sharp. To minimise likely movement of the pony I used a large aperture (f2.8) for 5 seconds at ISO 2000, when a better hedge would be to counteract the shallow focus of the 85mm lens with a smaller f-stop (to deepen the field). Results with the manual setting were no better.

The 85mm is a great lens by daylight, but I need more care and experience with it by night.  This was only my second evening out with the new Nikon D700; after the frustrations of the Lumix LX3 it felt much more productive to be using shorter exposures enabled by higher ISOs, a faster prime lens (f1.4) and a viewfinder easy to compose through.