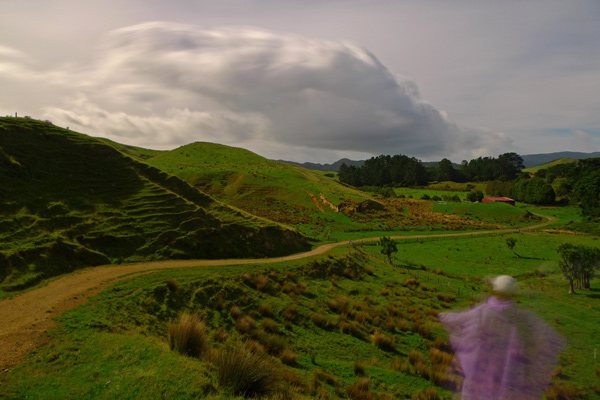 Cinematographers have a style called day-for-night, in which night scenes are filmed by day. They are underexposed and a blue filter is sometimes added for closer simulation. Here’s the opposite approach, a night scene designed to resemble daylight. Admittedly the original file is a little duller than this, and I have brought the large slow-moving cumulus out more, but the telling signs of movement are there – especially my sister’s walk-on role as a spectral presence.

The area around Westhaven Inlet in the far west of Golden Bay has some really interesting topography. On holiday on a Kaihoka farm, we all went out for a moonlit walk, for which naturally I took along my tripod and Lumix LX3. When you do exposures as long as 60 seconds apiece (at f2, ISO 100), in the gloom people can’t always see what you’re aiming at – I could hardly tell myself – or get that you’re actually photographing. By pure serendipity Fran has wandered into the wide angle frame, perhaps from the 3o second mark. Her  colourful but translucent windbreaker adds considerably to the interest, and despite her apparent pose no Shakespearean sililoquy was intended.

The main point to convey is that moonlight will resemble daylight if enough rays can assemble on your sensor. Usually it will be a warm-looking daylight, and usually it will need an exposure of 30 seconds or more. Secondly, though, if this apparent daylight is then undermined by obvious signs of motion or activity, how all the more startling!

Moving subjects might include people, animals, wind-blown trees, clouds, water and surf, washing on the line… I’m still exploring the possibilities myself.

The composition is also worth noting, as it is again in classic thirds (see no. 20. Spring willows). The sinuous road matches the ridge line, while the brightest part of the cloud mass has its counterpoise in the figure; meantime a bright rooftop anchors the perspective. At least some of the photo was deliberate.