34. Quirky but Perky, by moonlight 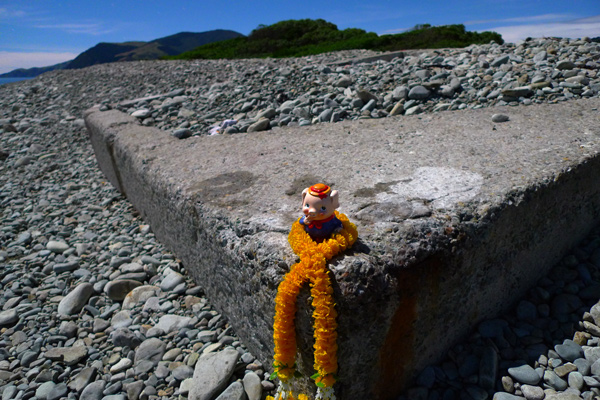 We took Perky Pig, a retro coin-jar, and a plastic garland out to the Boulder Bank, Nelson, to add colour to the textured landscape. Perky’s from an op shop but the garland comes from Bangkok, where they are much used. The orange highlight and strong lines of the concrete groyne are offset by the background scrub merging with the heights of prominent Drumduan, backing the coastal enclave of The Glen. Our scene was just below the occasional passing headlight, but unfortunately not beyond the pall of the sewage works nearby.

The exposure was 60 seconds at maximum aperture: f2, ISO 200, with the zoom at its widest. The daylight effect is pronounced, but without visible star trails and obvious cloud movement nothing suggests actual moonlight, as even the distant lights of The Glen are hidden by the low viewpoint. I forgot movement!

Such a good depth of field seems unlikely at f2, but not if you recall that format size relates to depth of focus. Good focal depth is typical of the small sensors in compact cameras – here the Lumix LX3. So what exactly is f2? As f-stops represent a fraction, or ratio, between aperture size and focal length (distance to plane of exposure), then f2 actually means one-half, that is, a size half the focal length…

A zoom has to extend the lens to change the focal length, so it makes the ratio at the far end smaller – on the Lumix, f2.8. A single stop isn’t much except with longer lenses, if your camera is already at the edge of its light capabilities. Then it can make a big difference.