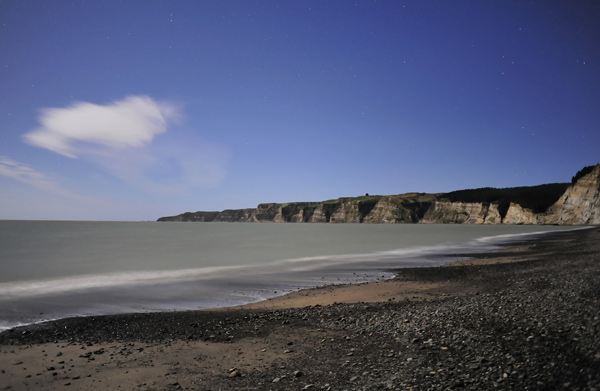 This was my first night out with the new camera, so I was keen to see what ISO 2000 felt like for moonlight photography; also the extra scope having f1.4 on the 85mm lens – not a lens I’ve used before. I had a new 28mmm lens to try out too.

I’d decided on ISO 2000 as the general limit for night photography after studying www.dxomark.com, a useful website which ranks sensor ISO fidelity limits (amongst many other things). The Nikon D700 scores well with good colour and saturation up to ISO 2300, helped perhaps by the full frame: “Give those pixels and photons lots of elbow room.”

This night a spring storm had been blowing for days, but we were wrapped up and at least had our backs to the horribly cold blast. After finding our way to Clifton Beach and through the motor camp ($1 in the slot) we parked right at the road end. Then a walk along the stony beach, under the cliffs, to this place, which I’d never been to before… Google’s satellite images don’t really put you there, but I do find them useful after a visit.

This is one of the first views I took on the 28mm lens, at the maximum of f2.8 for only 8 seconds, not bad for two nights before full moon. As usual, I screened the tripod from the wind as much as possible. It blew from offshore so there was minimal surf, which is a relief when you’re working close to the tide, even in gumboots. The cloud adds interest to the sky; stars have been stopped; the colour on and above the cliffs wasn’t visible at the time, of course, but I was pleased to see the lines of cobbles along the beach clearly in the viewfinder, even at f2.8 max. There is vignetting in the sky at right, which surprised me.