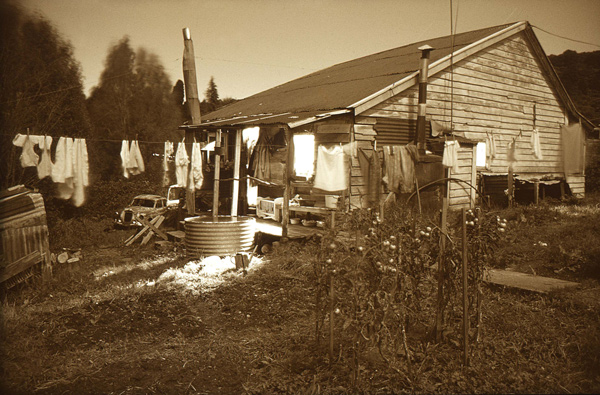 We were touring the South Island on a calendar assignment, and had arrived for Easter at Graham’s bucolic pad at Woodstock, south of Hokitika. He and Sue were paying $10 a week for this… everything in sight here had seen better days, including my white Morris van peeping around the corner. However the derelict Wolseley was a spare. The house was just back from the highway; oddly neither house nor highway are there now, the main road south being moved coastways sometime in the 1990s.

This looks wide angle; actual exposure was unrecorded but likely to be f8 for an hour.  Assuming your gear is safe from hazard or interference, long exposures from a garden can be quite comfortable ones for the photographer, as you head back indoors for the duration – while keeping one eye on the clock.

A faint star trail is visible above the roofline although moonlit skies are really too bright to do the stars justice. The breeze has blurred the washing on the line, as well as the trees at the back. The house lights are not direct; even after soaking through the curtains their wattage is stronger than the wan sunlight reflected by the moon (just 1 or 2 watts). The water tank supplied the household; the late tomatoes supplied the salad. Further interest could be added had I got someone to stand for just a few minutes on the path to the right of the tomatoes. A spectral figure would then deliver a compositional third punch.

The film was Kodak’s slowest panchromatic B&W, Panatomic X, rated at 32 ISO as I recall. It was developed by a reversal process and then sepia toned, to add contrast. This procedure was a fraught one as frames were toned singly and I lost a good number to careless handling. However this one survived, to be screened many times as a personal favourite; fortunately I understand the sepia chemicals make it resistant to light-fade.