35. Saturday night in the Domain, Auckland 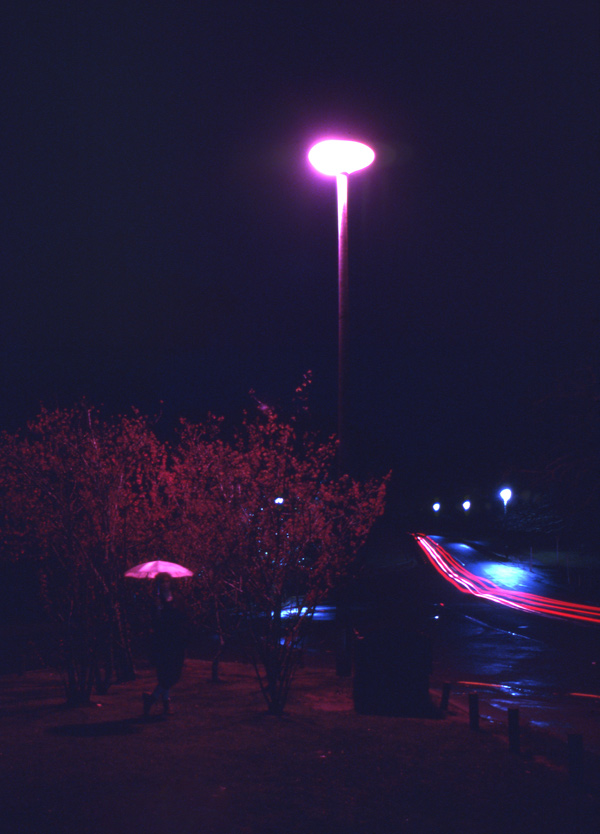 Suggesting an alien spacecraft landing, this scene is one only a vertical composition could accommodate. Unspooked, Jane was also accommodating and held her umbrella pose well for almost a minute, as cars drifted past on Domain Drive, somewhere near the Auckland Museum. We had wandered through the Domain at dusk; it was too cloudy for any moon but the drizzle gave us a wet road and reflections.

The pink umbrella sets off the wintry leaves (still there owing to the streetlight?) and the light trails. I was using Kodak 2483, an E-4 microscope film which I had some fun with over 1981-82, after buying some outdated rolls for 50 cents each. Its strong contrast preshadowed the advent of vivid slide films sometime after Y2K. 2483 was also distinctive for its fine grain, although this was achieved with a laughably low ISO of 16. What took more getting used to was the strong magenta bias – a shocker at first, although I soon learned how to apply it. Here the cast is emphasised with a further colour shift likely from the long exposure, known as a reciprocity effect.

The low ISO enabled long exposures earlier in twilight. Exposure for the above was unrecorded but was probably f16, the smallest aperture on the standard 50mm lens (Pentax Spotmatic F), for around 45 seconds. As I haven’t worn a watch for 30 years, I always just counted the seconds off. Now that estimates can be checked against actual time elapsed on a digital camera I see that mine are no more than 5% out – for the first 2 minutes anyway…

Given the high contrast, the exposure is about as good as you’d get on the one frame of film. With film of course there is not the instant feedback on exposure guestimates, meaning I regularly lost frames in bracketing or from careless estimates. At least I didn’t lose friends as well – their patience for my photo experimenting was remarkable.

« 34. Quirky but Perky, by moonlight
36. April evening, Woodstock, near Hokitika »