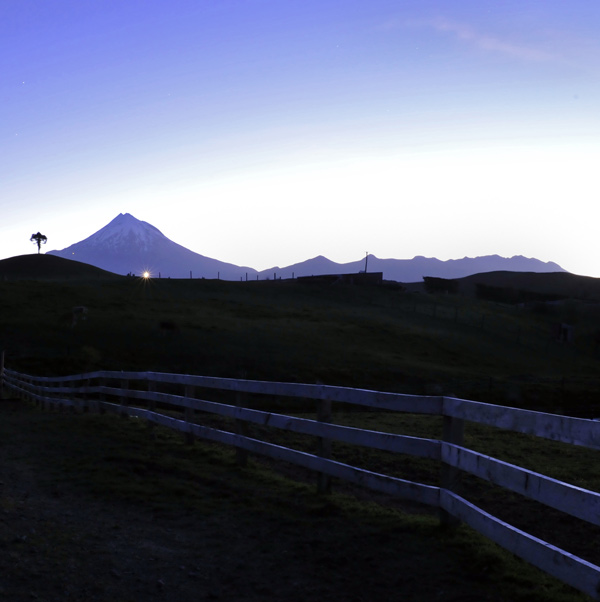 Taranaki can really hold a pose when the clouds depart, and a southerly keeps the peak clear for days at a time. However you don’t want to be in it for long, as a fierce, frigid wind can really rock your boat. Set room temperature to “Brrrr” to view this photo in full context.

The foreground Pete Turneresque fence seemed to have some depth-conveying possibilities, so with the tripod already out for the twilight, I took this at f16 for 20 seconds, using ISO 2000 and the 28mm lens. Regardless of f-stop, this depth of field is impossible with my 85mm lens. Incidentally, f16 or 22 is not a mechanical limit for small f-stops but a technical one, due to diffraction. This causes a loss in both sharpness and contrast with smaller f-stops; see www.kenrockwell.com/tech/diffraction.htm.

A higher viewpoint would have separated the ranges (the Pouakai) from the near ridgeline, but we were just off the roadside and none was to hand. The exposure has suppressed most of the foreground detail – there’s an old cowshed on the ridge – but underexposing has allowed Venus and two stars to shine through at left. Also visible is the light from Tahurangi Lodge, high on the mountain, and (more prominently) the top light of an oil and gas derrick, which is just showing above the ridgeline. White balance was set to auto.

The square format is experimental; I have an e-book project which requires them. They  are much more demanding than rectangular compositions. On the Lumix LX3 there are 3 format choices, including a TV style 4:3, but Nikon are still captive to the standard 35mm frame, which gives 2:3. Thus my square compositions are all cropped from the usual rectangular original.

I think a little more cloud, horizontal and pinker, would have enhanced this. No doubt  post-pro features such as “Select pink cloud type to add” will soon be routine, but I won’t be using them.