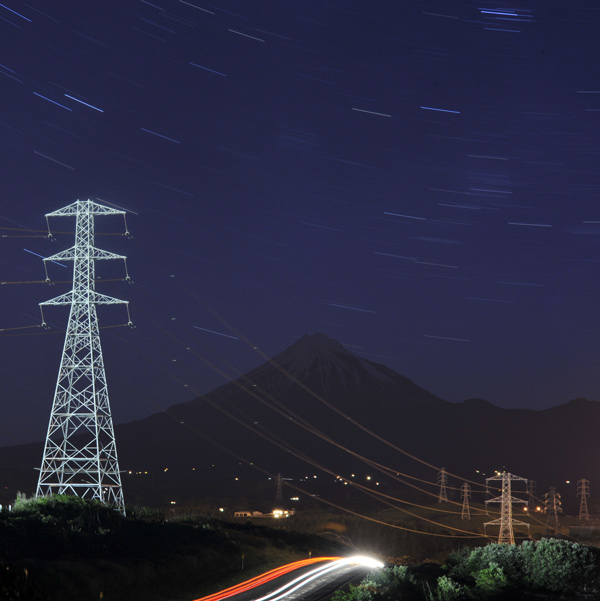 Taken from a perennially windy location above Back Beach, New Plymouth, this recent evening was notable for its wonderful calm. The photo is yet another attempt to nail a perfect score from this outlook. A tiny sliver of moon had set on the western horizon, which my 85mm could hardly do justice to, but the lens was just right for this scene, cropped from the usual D700 rectangle.

The near pylon is lit by huge floods from Dow Chemical; the far structures are close to the tank farm, the usual glare from which some bushes close to hand were the screen. Traffic here is generally light so it was luck to get the car lights, as evidently the tankers have Sundays off. Lack of moonlight means brighter star trails and looking south gives them their slight curve. Southern hemisphere stars “revolve” around a point not far from the Southern Cross. Even without moonlight the receding snow cover on Mt Taranaki is visible, while the pylons look better with light balance set to tungsten.

Exposure was f16 for just over 8.5 minutes on the bulb setting, at ISO 500. I did a trial shot at faster settings, then extrapolated a longer one for the star trails. If you don’t use manual on your camera you might not understand how all the settings work in multiples, either doubling or halving (depending which direction you’re heading on the dials). One equation can be the same as any other relative to the light admitted, but results can be substantially affected by variations in shutter speed, aperture and ISO selection. Lack of knowledge of the interplay of these variables must frustrate many a picturemaker.

For this sort of night photography a higher ISO is a hindrance, and to avoid overexposure from your intended time, once you have stopped down to the smallest aperture your only choice is a progressive dropping of the light sensitivity (ISO).

« 38. Mt Taranaki at twilight, from Junction Rd
40. Nightfall in blue at Waiwhakaiho »