40. Nightfall in blue at Waiwhakaiho 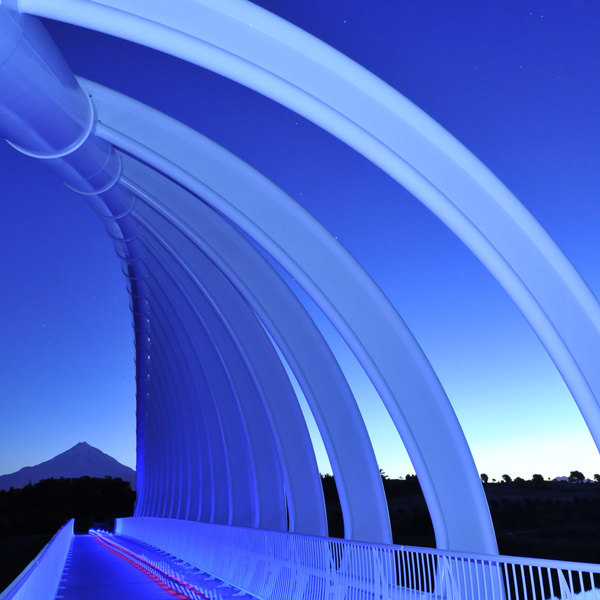 The Te Rewa Rewa bridge is a striking structure which extends New Plymouth’s coastal walkway towards outlying Bell Block (see no. 6). I set up this frame some 55 minutes after sunset, on my return from a long wander on a perfect evening. As the perspective suggests, the lens was wide angle (28mm). Exposure was 30 seconds at f16, ISO 2000, or just two or three stops faster than broad moonlight. The light balance was set on tungsten, which accounts for the engaging blues.

Fill-in flash has lit the foreground. Flash has some intriguing possibilities at twilight, generally to highlight foreground detail otherwise shrouded in gloom. Adjustment of ISO modifies how brightly your closest surfaces are lit by the constant flash; to this shutter speed or aperture can then be matched for the background twilight – all on manual settings of course.

At this hour the bridge was unpopulated, and even the distant city lights have failed to impact. I was surprised however by a cyclist arriving on a reclining machine with cinematic side lights, which resembled something from a sci fi movie. He appeared at the far end in blue, but quickly changed to red as he approached and glided past. I have him to thank for the extra highlight added here. In composition terms I consider it the third punch, the mountain forming the second. Often I am at places which have plenty of two-punch prospects, but have a dearth of thirds.

I have over-levelled the frame a little in post-processing, and the compact square format has cut away most of the river reflection to the right. Missing also is the slender moon, too high in the sky at this time of the month to be in the frame. With moonlight photography one can’t help but learn a little about celestial mechanics: only the newest of moons will ever be seen in the western sky soon after sunset.

« 39. Mt Taranaki at night, from Centennial Drive
41. After midnight on the porch at Te Hapu »