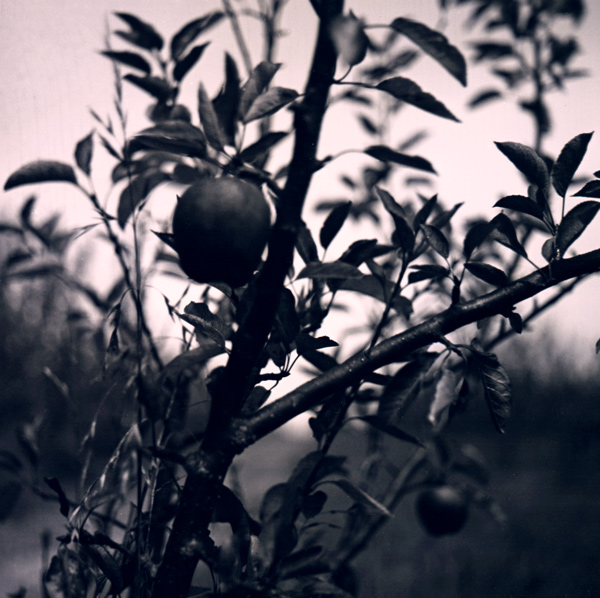 Neudorf is an orcharding district near Upper Moutere, Nelson; I took this not far from where my girlfriend and I were staying in a worker’s cottage, occupied by her apple-picking sister. Not a simple composition, this experiment in moonlight photography will not appeal to everyone, but it has held my own attention with its selective focus, deep tones and unusual tints. I’m not pleased with the background, but these are so often hard to assess in nocturnal camerawork.

Without a powerful torch most focussing by moonlight at close range can only be approximate with a roll film camera (such as the Yashicamat 124G), which is no surprise with a bigger format. Additionally the film was Ilford Pan F, a slow 50 ISO, although here it was marginally uprated to 80 ISO. Once reciprocity slow-down is factored in, exposures at f3.5 (max aperture of standard lens) are in the vicinity of 10 – 20 minutes, and recalling my impatience to take other photos around the orchard, the exposure above would have been at the shorter end. I had 2 cameras but only one tripod.

The depth of tone here reflects the fine grain of a slow-speed film, while the odd effect of two tints is achieved readily in Photoshop. After scanning I converted Mode to colour, and then under Colour variations I played around with different combinations, with Shadows and Highlights. There are only three colours available (red, blue or green), or their mixture in layers.

If you live around about our southern latitudes then May is a good month to go moonlighting: the nights are often clear and the moon is higher in the sky than in summer (in reverse of the seasonal solar arc). Best of all, however, is the early start you can make in the evening, especially on the night before full, when the moon is already up. When you have creative juices rising too, though, one tripod and slow film does hamper you.