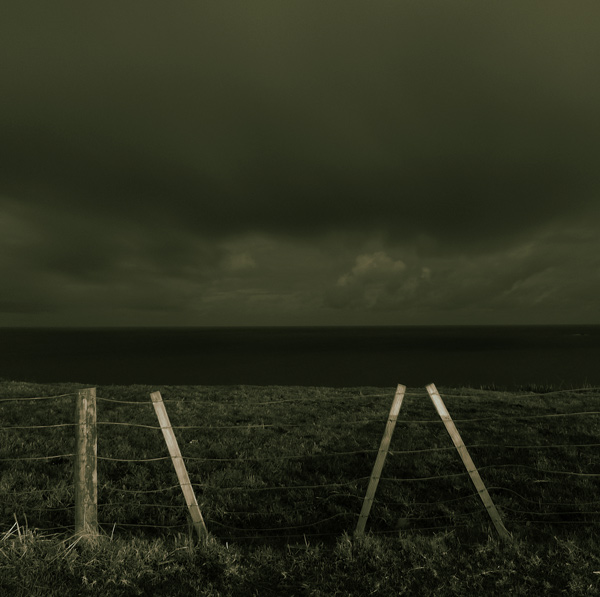 Actually the foreground is lit by the petro installation on Centennial Drive, New Plymouth, but the fast-approaching squall is by moonlight. My car had to be parked next to my set-up for shelter from the strong wind. The squall came in rapidly and soon hit, so the next shot was abandoned halfway. I discovered that clambering into your vehicle in pelting rain with a long tripod and open-shutter camera is harder than you’d think.

The artificial lighting at this distance balances with the clouds, whose brightness required  slightly shorter exposure than the usual Lumix LX3 scenes: 40 seconds at f2, ISO 200. In this wide angle view, movement in the squall cloud is less than expected, although it is only about 600 m away. The well-defined cloud beyond must be heading straight for the camera, as well as being much further out, as 40 seconds is long enough to blur similar clouds if they are closer, or moving across your view.

As the squall had tone rather than colour, and as the foreground colour didn’t add much, I switched to black & white in camera. The moody tint was added later in post-processing, under Colour variations (convert to colour in Mode first). The simple, layered composition gives a sense of depth and works well for me, but would be less effective if the fence battens were unangled.

The advantage of the square format for the photographer is that neither horizontal (usually) nor vertical lines are immediately favoured as elements in the composition, meaning that all lines on offer to the creative eye compete on equal terms! However, to be sure that I do not fall captive to the lure of the square format, this image completes the current series.

The coast here is now protected as the Tapuae Marine Reserve, a development which contrasts strongly with my boyhood memory of a suspiciously smelly outfall in this neighbourhood – on Paritutu beach below the chemical works.

« 42. Neudorf apples by moonlight
44. Moonrise from the Devonport ferry, Auckland »