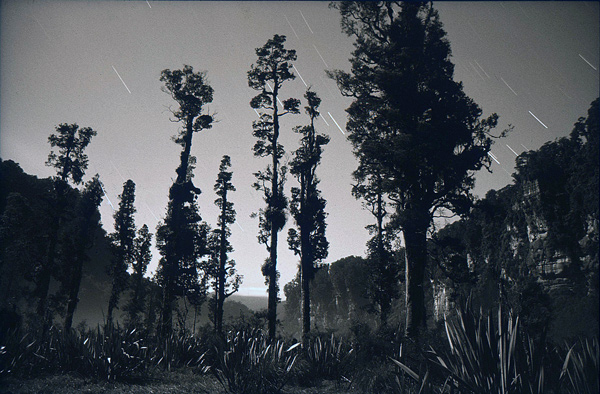 Bullock Creek is not far from the pancake rocks at Punakaiki, on the South Island’s West Coast. This 40-minute exposure by moonlight was taken by the side of the gravel road running up the pastoral floor of the canyon to the backcountry of Paparoa National Park. Mist slowly forms in the middle distance; the limestone cliffs have numerous caves  at river level; the trees are all kahikatea, a white pine which doesn’t mind soggy ground – and nor does the flax. The star trails show their curve around the south pole, so we are looking east or southeast here.

The view is wide angle (28mm) and at least a half-hour of open aperture is evident in the length of the star trails, as these take longer with a wide angle. Exposures of this length don’t occur to me very often, as usually I’m weighing up the chance of getting 5 other shots for the same time spent.

Also there are other constraints, even when battery life was irrelevant back in the time of film. Why risk your lens misting up on an autumn evening with a shot lasting an hour? And because with such long exposures you tend to walk away from your gear – to sit in the car, on the porch or best of all, around the campfire – the risk of disturbance is so much the greater from stock, wild animals, walkers and dogs, hunters’ vehicles. We were camped fairly close by, so for this one I returned to comfort and company to wait out the time. No one drove by the entire night.

The monochrome here is Kodak’s fine grain Panatomic-X, 32 ISO. Although this was not a film I used much, the results when reversal-processed with a special kit were impressive. I then sepia-toned the slide for extra contrast. After scanning, however, I decided the more neutral cast given it by “Auto colour correction” was just as appealing, and that’s how you see it.