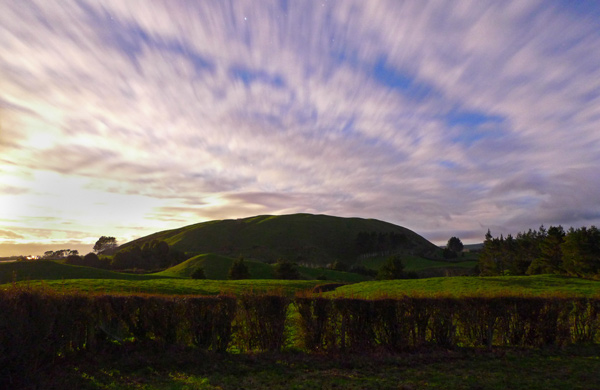 German Hill (395 m) is quite prominent on the north Taranaki ring plain; the only evening I’ve been to the top the wind chill was so ferocious we stayed only a few minutes. This night, though, I was hanging around solo on Maude Road, waiting for an after-full moonrise. The sun had set more than an hour before, so the light above is all lunar, as this equation makes clear: f2 at ISO 400 for 60 seconds, on maximum wide. This setting is right at the edge of the Lumix LX3 capability.

There’s an unexpected blue between the moving bands of cloud, and the sweet look of dawn. The highlights are totally blown, admittedly, but without a graduated neutral density filter or any fondness for high dynamic range (HDR) the choice was simple: either get the sky right or the landscape below.

Moonlight photography in winter has one big advantage over other seasons: night comes earlier, moon rises sooner. The same celestial mechanics also favour camerawork on the evenings after full, when the waning moon rises roughly an hour later each night. Let’s take the winter moonrises of July 2011 as an example, say from 40 degrees south (175  deg east). The full moon rises at 5.14, exactly at sunset (usually it’s only close) and on following nights it rises at 6.19, 7.22 and then 8.24pm. Even when we allow another hour or two for the moon to gain some elevation for a brighter light, these times are not too yawny for most people to venture out.

But in summer? This (southern) December the full moon rises at 8.44pm, 4 minutes before sunset, and on the wane it shows at 9.43pm, 10.16pm and 10.53pm. As the summer moon also arcs low, it takes longer to give a good light. Few people find the midnight hours especially creative, particularly outdoors. The secret on these evenings? Get out earlier and play around with starlight or city glow, while you wait for the magic moment.