65. Round Rock by moonlight, Back Beach 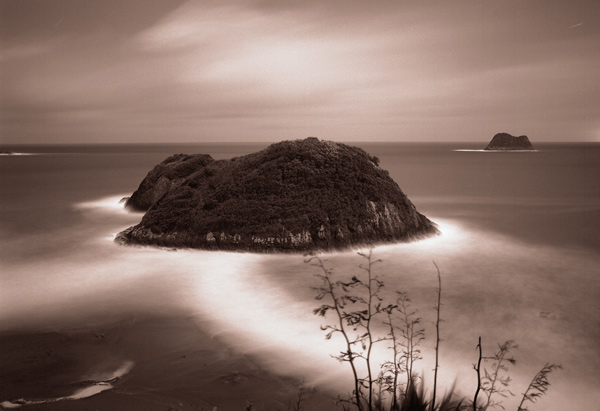 I was pleased with this wide angle 6×7 photo. It conforms to the usual conventions, has all I look for in moonlight landscapes, and will blow up nicely. I like the blur of cloud and surf,  two star trails and the flax stalks shaking in the wind… but some ugly gorse has been cropped.

New Plymouth’s Back Beach, with its three little Sugar Loaves, is reached by a long flight of steps from Paritutu Centennial Park. Round, Seagull and Snapper rocks (Mataora, Pararaki and Motuotamatea) have varying foot access: Round Rock is accessible at every tide but neighbouring Seagull Rock can be reached only at lowest spring. The far island here is Saddleback, or Motumahanga; Snapper Rock is out of view to left.

The Pentax 6×7 makes a good second camera for moonlight photography, but the extra gear – and tripod – means I don’t wander too far from the car. I mostly use Ilford B&W films, FP4 and HP5 (ISO 125 and 400 resprectively), doing much longer exposures than on the digital, often using f5.6 or f8 and 20 – 45 minutes shutter. The smaller apertures give better depth of field on the medium format and help cover manual focussing errors. Having found the shutter lock leaves a tell-tale shake on bright highlights, I always use a cable release, and then dial my low-tech timer to the required time.

These longer exposures allow me to concentrate on 30 – 120 second possibilities with the digital on the other tripod, rather than racing from camera to camera and back again, setting up new shots. This more leisured approach suits the 6×7 well because of film costs and the greater care that a large and heavy camera requires. It follows that selection of prospective frames is tighter too.

I keep within earshot of the timer bell but there’s plenty of latitude, as even 5 minutes of tardy makes no difference at the end of a 4o minute exposure, everything else being equal.