64. Urupa gateway, by the half moon 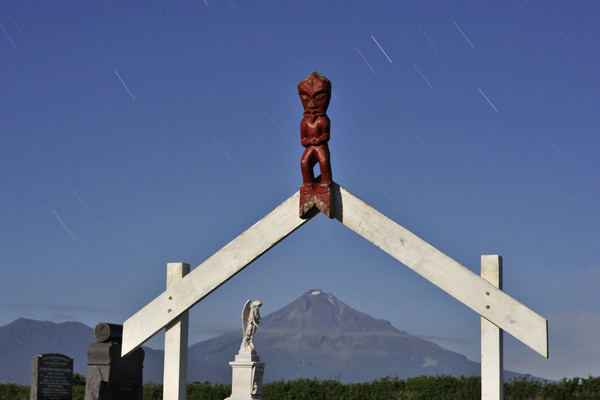 Taranaki has many small, secluded Maori cemeteries. This one on the coast near Puniho is the only local urupa I have seen with a decorated gateway, and an angel in residence. The unheralded location, far off and fenced within a field, gives the nearby surfing spot its name: Graveyard’s.

The light is solely from a summer moon 6 nights from full – so the caption is out by one night. However it was a novelty to have the moon in the west for my excursion. As the half moon is at the sun’s noon position at sunset, you can use it only as an “afternoon” light. This westerly light made for an interesting change, particularly as the moon drew closer to the horizon.

Star trails dramatise an otherwise blank sky in this 6 minute exposure (f16/ ISO 2000). Trial exposures of a few seconds at f1.4 and f4 enabled a sharp focus on the gateway with the 85mm lens, which is very precise in its focus. I then stopped right down to f16 to get the background as sharp as possible, and to give a longer time for star trails.

To extend these further still I could have reduced sensitivity, 6 minutes at 2000 ISO being the same as 12 minutes at ISO 1000, and 24 minutes at ISO 500. These would give better trails, but in truth I begrudge the time, as dark-frame processing then doubles these – meaning 24 and 48 minutes of camera time!

The above result was a little brighter than expected, so I have darkened the image slightly for a better feel of night. Luminosity is hard to judge on the LED viewer at night, although I lower the viewer brightness every night out.

Of course I had the place entirely to myself and plenty of time to enjoy the pastoral smells and background surf, but two hours passed rapidly. The only interruption was a disconcerting thrum, which turned out to be a helicopter coming ashore from the rig.