67. Ti kouka in flower against a starry night 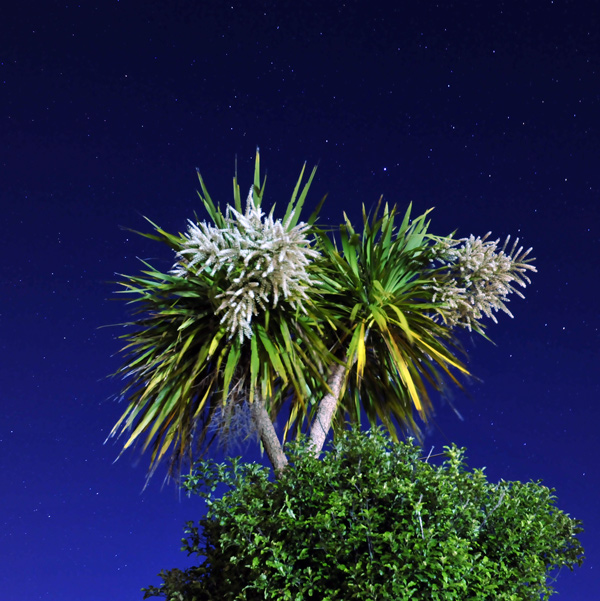 If not for the ti kouka or cabbage tree, November would be a sparse month for New Zealand native flowers. September and October bring the beauty of the kowhai, and December the much-loved pohutukawa and rata blossoms, but in between we have just the humble cabbage tree. It’s common on open land and forest margins, and while the flowers are not as showy, they last well and are richly scented – pungent, some would say.

So I inhaled this one at Marahau before actually noticing it. Although taken on a moonlit night, the light was much brighter, coming from the excessive wattage of the chillers in the general store across the street. Tungsten on the D700 gave a better match for the greenish quality of the flourescent lighting, but a residual cast has been nixed in Photoshop with “Auto colour correction”. I often use this feature to test colour balance; here the compensating hint of magenta seems more acceptable than green, especially as the environs were lit by sodium lamps.

Picture control was on Vivid and this accentuates the nice contrast between tree and sky. Light falls off rapidly from artificial sources, as flash photography quickly demonstrates, but there are only two visual planes here to simplify this aspect. On 30 seconds with the 28mm wide angle (f8/ISO 2000) the stars are just beginning to lose their pointedness; this effect would be more marked with a telephoto, such as my 85mm lens.

However, trying the 85mm for the same frame at a greater distance didn’t work, as a TV aerial intruded on the background; from an alternative location in the middle of the road the flower stalks lost their salience, while my ears did extra duty for approaching motors. Such is the toil and trouble of the night photographer. By then it was 3am, and further effort was curtailed by fatigue, without a late rise to follow. Bedtime!