91. Half-lit shadows by the rising moon 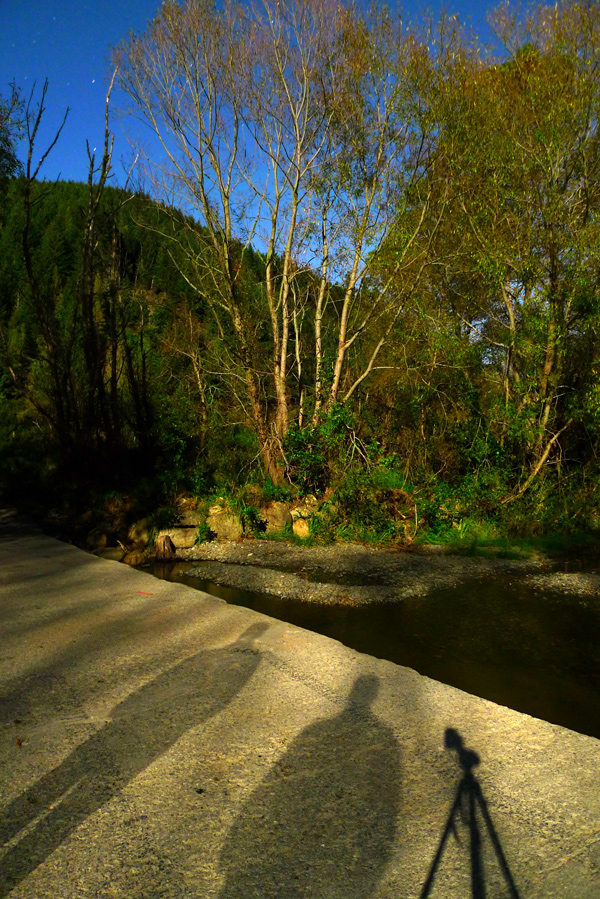 The adjective refers to my moving shadows, or rather my shadow having moved during the exposure. I counted 30 seconds before I side-stepped away from the tripod in this full minute’s worth of moonlight. The shadow dilution is evident in the darker imprint of the little Lumix on the tripod. I liked the angle of the concrete ford against the willow – the angle also mirrors the hillside. With the moon rising behind me the tripod shadow could not be avoided, so instead I got creative with the problem.

Adding shadows also fixed the composition problem of the plane of the ford lacking sufficient interest, although as a monochrome this might still have worked. The warmth of colour shows how the light from a low moon tends towards Golden Syrup – a warmth that daylight can only match when the sun is just above the horizon. I had had to wait some time for the rising moon to clear a spur in the valley, yet when it did there were still the long shadows that are useful to moonlight photography.

The “half-lit” adjective also hints at how the image depends for its impact on your angle of view on the laptop screen, or the brightness of your computer monitor. In viewing terms this is a Goldilocks image – not too hot, not too cold please!

The scene is the Maitai River, on the outskirts of Nelson, but looking like only a puddle here. April is autumn in New Zealand and all along the Maitai the willows and poplars dress accordingly. The ford gives access to a broad field in the narrow valley. Fords are uncommon in this country and culverts are preferred, as New Zealand rivers flood regularly. I would not perch my gear here after heavy rain.

f2 was used at the widest zoom – “24mm”. ISO was a low 100, contributing to a darker effect than I usually seek in my moonlight photography.