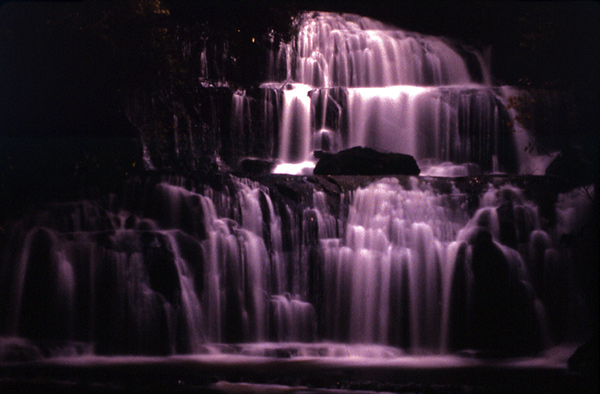 Overcast evenings at full moon can be really frustrating. When the moon is full you know it’s somewhere up in the sky, this being one certainty of the laws of celestial machanics. But you can’t see it. The real reason cloud is such a dampener on moonlight photography is that the extra 2 to 4 stops needed for the lower light add up to some very long shutter times. However such times are still practicable with film and manual cameras, where the durability of batteries is not an issue.

On an autumn evening on the Caitlins coast I saw that this premier scenic gem of south Otago rather unhelpfully faced south, and that even with Ektachrome 200 I would need a really long exposure. The 28mm wide angle on the Pentax went to f2.5 wide open. I allowed for the sky-crowding trees and high cloud by adding some extra stops to the calculation, and settled on 40 minutes as the appropriate shutter time.

We then faced a long wait on the boardwalk next to the falls, serenaded by their constant cascading rhythm. The tripod was on an adjacent rock, so avoiding vibrations from our pacing up and down. It was no surprise that on a week night in May we had the whole place to ourselves, but it made camerawork easier all the same. If there was any upside to the cloudiness it was that it gave a mild rather than frosty night for outdoor activity, as we counted off the minutes of muted moonlight.

I was pleased with the blur of the water here, although this effect generally takes no more than half a minute. The waterfall is much photographed but even so I have never seen it captured over a similar time-frame. The 40 minutes was actually only enough for the highlights, but that has probably created more impact, if only in a monochromatic style. No doubt this picture would be equally rendered with black & white film, especially if the print was then toned.