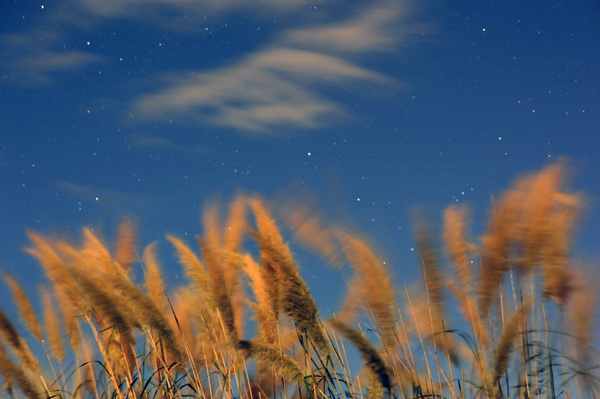 Two lagoons soften the urban impact of Waikanae, a retirement community spread out across the sand country of the Kapiti coast. The estuary is notable for its bird life, and 60 bird species breed there. The pampas grass above fringes the freshwater Waimeha Lagoon, a wildlife refuge well screened from surrounding suburbia. Even at night there was a hubbub of bird calls from the waters.

Presumably the pampas grass has been part of the lakeside planting, although the vigour of its clumpy growth gives it weed status elsewhere. Here it provides colour and contrast  against a starry background. I was interested in the movement of the blooms, but with the telephoto’s shallow depth of focus I had to compromise between a smaller aperture and the cloud likely losing too much shape in the longer exposure required.

I couldn’t expect the cloud to hold still while I decided on the best setting. As with my earlier  Lumix LX3, I’ve only used the M (manual) setting on the Nikon D700. While you need less decision on auto settings, you also give up considerable creative control. To me the key thing with auto is that it’s harder to work out which variable is causing you problems – and for sure, moonlight photography is all about variables. And problems.

This shot combines moonlight and urban glow from far-off street lamps. Using the tungsten (incandescent) setting made the shot too cool, so I kept to Direct sunlight for light balance. In post-pro much of the warmth has been retained; you can see it too in the cloud. Light pollution comes with the territory of course, but in a long exposure any low cloud shows the pervasiveness of this pollution, even in apparently remote locations. This was my recent surprise at Te Hapu, a cattle station in Golden Bay, where light from several street lamps well over the local horizon showed up in the cloud layer.