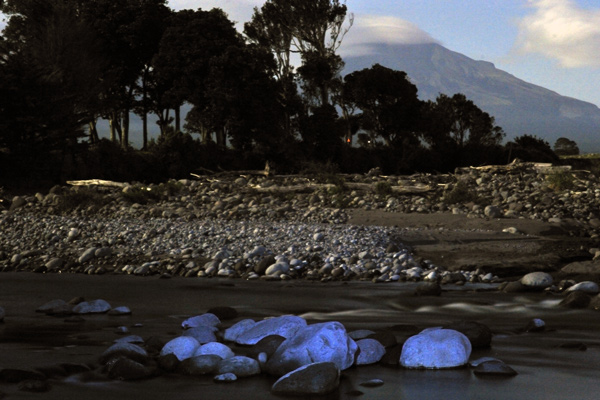 Twilights in the plural because the background stones along the Stony River are moonlit, while the far slopes of Taranaki soak up the last of the day – although there must be some moonlight in there as well. However, the mid-distant rocks are lit from the north, where the half moon was well up in the sky. This uncommon sense of natural light from two different directions is quite subtle to the naked eye.

It’s more telling in a photograph, despite the surreal addition of foreground highlighting from the wan beams of an LED torch. Focus with the telephoto was too dim by eye, so to get a better depth of field I stopped down and decided to risk an increase in ISO, to one stop beyond my usual 2000. The difference in grain however is palpable.

Although this shot is not an immediate attention-grabber, it has interesting detail: cloud movement on the peak, a layer of flood-borne debris on the rocks, and a blurry river ripple above the boulders. Going upriver I found that the little red highlight was a track marker, while the other bright spot is a metallic band protecting a tree from possums.

Location is just off the Stony walkway, which largely follows the river. The Stony (Hangatahua) River is the only major river in western Taranaki, notable for its flood-prone wildness and the rapid descent it makes to the sea. Here it looks relatively tame, but the curve it makes around to the right below the trees suggests a high gradient.

Any wide riverbed makes an attractive venue for moonlight photography, especially if it has easy access and is tree-lined. A wide bed has the advantage of better lighting earlier in the evening. However what you gain in personal safety from the sense of seclusion is compromised by the rough terrain you have to cross. This applies too to setting up on the water’s edge.