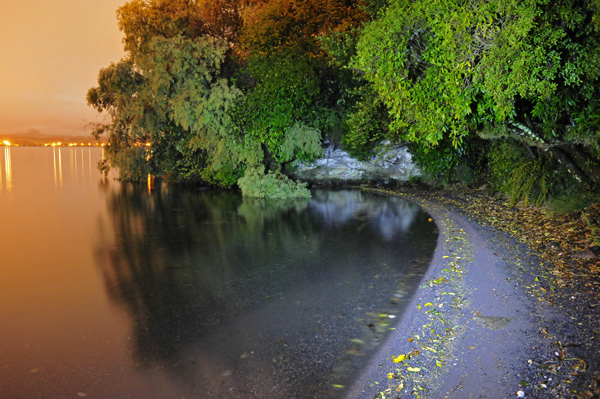 Here is a secluded suburban cove at Acacia Bay, and my first night landscape to be largely light-painted. I was surprised to get this so evenly lit, considering each part was separately highlighted by a tiny LED torch from just the one position, behind the tripod. The background lighting is urban glow from Taupo, magnified by the low cloud.

Above the cloud and drizzle was a full moon, but to my chagrin this didn’t show the entire evening. Without moonlight I had to use a higher ISO setting and I was pleasantly surprised to see how well the scene was handled by 6400, the maximum ISO on the Nikon D700. There are higher settings, but they are not picture-quality (still useful, however, for exposure trials).

What works here, I think, is the unexpected colour contrast of the sodium-lit sky and lake reflection with the lovely green and yellow of the cove. There is even some movement to be seen along the shore in the leaf-littered wavelets, created by the strong northerly which had been blowing across the lake.

Focus on the wide angle lens was set manually using the bracket marks on the barrel, as explained in post no. 104, Stony landscape. The Direct sunlight (daylight) light balance  was selected because it matched the LED torchlight, although an older filament-style torch would be tungsten. The incandescent setting would have adjusted the background orange but also given a cold, blue foreground, where the major interest is. The warmer choice above is kinder to the human eye.

Although previously I have regarded sodium-dominated views as having few picture prospects, I now see that as long as their harsh light is softened by distance, sodium lamps can provide an unusual backdrop colour for night photography, assuming you are happy to wave a torch around the foreground interest.