112. Beaming down on the Boulder Bank 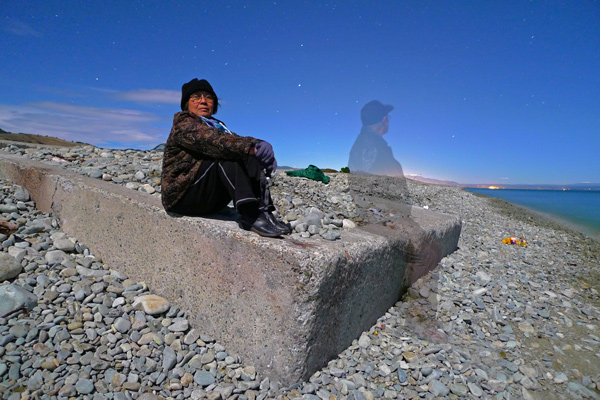 Teleportation is easy enough to do by moonlight photography. Even on a cool autumn evening not far enough from the Nelson sewage ponds, planet Earth is a good place to beam down on. I do like to visit but would I want to live on it?

Just kidding. Of the various forms of ghosting in night photography this is the most basic, created under pure, simple moonlight. Other forms are lit by flash, torchlight or car beam, but to get this you simply occupy the stage for part of the exposure – say 40 seconds of the 60 represented here – while requiring your supporting cast to stay put. Here my long-suffering wife Narumon holds her gaze on the laid-back surf of Tasman Bay; I have walked into the frame some time after the shutter opens.

Note that nothing registers of my moving into position, because I have no reflective highlights.  In some situations coming or going from place people will show up because they are smoking, wearing light-catching rings or jewelry, or have on something luminous. Or  their movement might be caught by a sudden bright light, as in the sweep of a car’s headlights. Sometimes such highlights add an intriguing element to your scene, and sometimes they just look odd. You won’t know until you see it, as the effect is unpredictable.

At the head of the bay are the landing lights of Nelson airport. A snowy peak in the Arthur Range is just visible on the right, while resting on the cobbles are two props waiting to feature in my long exposure studies (see no. 34. Quirky but Perky, by moonlight). The depth of focus on the Lumix LX3 at maximum aperture is phenomenal, especially when the zoom is set at the widest angle. However the autofocus has about a 10% failure rate, while  the manual controls are so fiddly for focus that I have never actually tried them.