113. Night at the saltwater lagoon, Waikanae 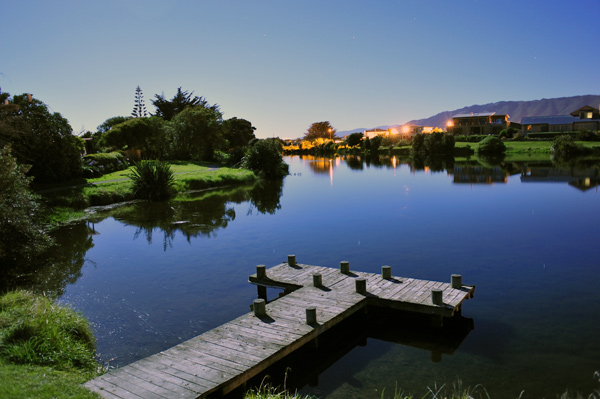 The Waimanu Lagoon at Waikanae connects by way of a floodgate to the adjacent estuary. Both sites are favoured bird habitats, and bird life appears largely unaffected by the suburban surrounds. Access to this pier is by a narrow sealed road but the area is also very walkable. On a week night I felt quite secure out in the moonlight here with my gear.

To get this simple scene by the full moon and urban glow I used the incandescent (tungsten) light balance, which softens the colour cast of the artificial lighting. This renders the moonlight cooler than it really was – notably in the grassy areas – but gives a nice emphasis to the blues, an effect quite acceptable to the human eye.

I resisted the impulse to add my ghost to the pier, although for unghostly self-images the Nikon D700 has various self-timing options, the longest delay being 20 seconds. To get this viewpoint however the camera was already set up on a handy picnic table, and by time I remembered the self-timer I was back down at ground level, avoiding possible tripod vibration. Finding the self-timer is a nuisance in the dark, but the real awkwardness is with the fully extended tripod. You must lower it before you can use the fiddly controls on the top of the camera, then re-elevate the camera and re-establish your frame.

The problem with advanced digital cameras is not that they have too many controls but rather with their poor arrangement. The ergonomics of the D700, for example, are ghastly, while the Lumix LX3 on manual has one tiny toggle to cope with the three key functions. Film cameras seem so simple in comparison. Take the old Pentax 6×7: once your ISO is set, there are just two settings after focus: shutter speed and aperture. Simple!