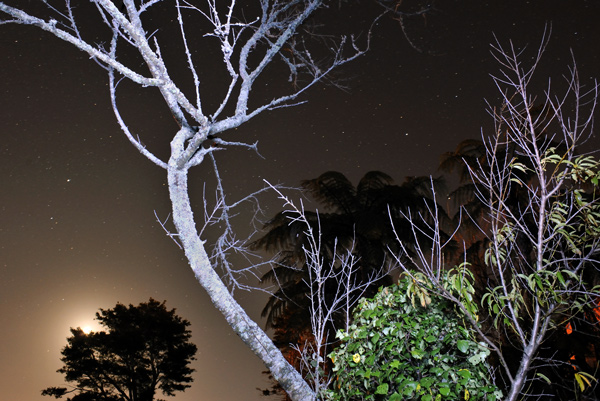 Out for some night photography, you’d think that the simple equation of dark = dark at least ensured you had plenty of time to set up your masterpieces as you came upon them. That is, without finding the common daylight problem of something changing your scene. Alas, so often this is not the case!

Of course wide clear skies favour night photography with a constant light, but until you are far from people, porch bulbs and car headlights that is hard to guarantee. Last year some  lights at Port Taranaki were switched off just as I was recording nearby Paritutu by their glow. Changing situations at night are matched with slower reaction times, caused by having to fumble about in the dark and by the extended exposures that go with the territory. Many of my frames take minutes before they show up, and things can and do happen even over that short time.

While a high moon is a steady light, when it is low on the horizon the moon’s movement from earthly rotation soon becomes obvious. After the shot above I took some of the moon emerging from behind the tree, with disappointing results. To get the moon back where it was I could move the tripod, but that also shifted the closer elements of the composition, which were just as important.

Clearly the sinking moon is only one light source here. Distant street lamps and house lights add a little to the background, while the main business up close has been done by hand with a small torch. Torchlight was gradually worked over the dead branches. The foreground marks the boundary between my parents’ property and a suburban void beyond. Much of New Plymouth is on rolling country, so that the suburbs are interlaced with unoccupied gullies or damp hollows – most of which will never be built on.