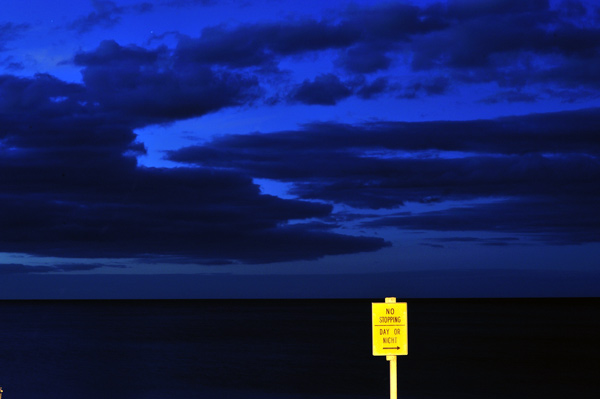 A companion piece to no. 107. Twilight tractor (and taken 6 minutes later), this electric call to good order conveys another mood. Existentialists may freely dwell on it. Outside the Waikanae boat club 45 minutes after sunset, the balance of light was changing in favour of artificial light. A star is visible in the nightfall. A full-ish moon had been up since 6.40 pm, so I suspect moonlight had a role in boosting the sky here.

On the Nikon D700 I used the Incandescent (tungsten) light balance to desaturate excessive yellow and intensify the blue. This was going to be a colour statement. Other decisions were also straight-forward: 1. a “short” exposure time to keep the clouds well defined; 2. a very small aperture for maximum depth of focus on the telephoto, and 3. Vivid picture control, for snappy colour. A simple composition such as this is all mood and colour.

The telephoto was a natural choice for the canvas, as a flattened perspective enhances the composition, which is in typical thirds. One horizon line was ample here and the top of the sign was lined up with it. By taking the shot from the elevated frontage of the boat club I could keep the beach itself out of the picture. Also just out of frame is the northern tip of Kapiti Island.

Having the camera already set up on the tripod meant more options at twilight, including long exposures for light trails from boats coming in. Hand-held shots in this gloom were still possible with a fast standard lens – say 1/30th second at f1.4, at ISO 2500 – and for people shots doing hand-held at the wide end of the zoom can still be a good idea. But I prefer a tripod. While there’s no doubt that it slows you down, it’s usually to good effect – your picture-taking will become more deliberate.

You don’t take many snaps when your camera’s on a tripod.