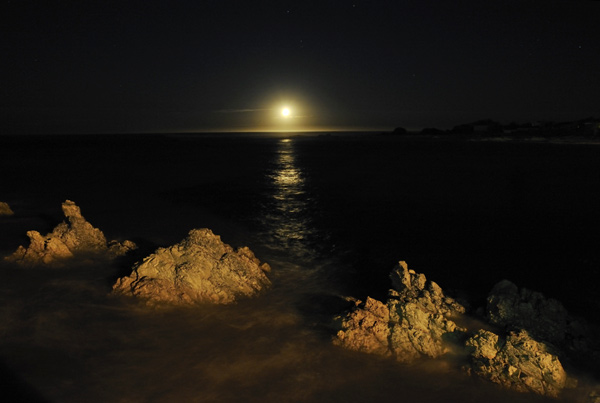 Tomorrow we shall set out once more upon the vast sea. –  Horace

Moonrises after dark indicate the moon is past full, and these moonrises, especially, need a frame of reference. They benefit from foreground interest, in this case from outcrops alongside the wharf at Kaikoura, on the east coast of the South Island. It’s a variation on the theme of no. 94, Kaikoura moonrise, and in fact taken just 14 minutes later. The spring tide was ebbing and shortly the rocks would be exposed on the beach.

The wharf lights were orange-red, for which the Incandescent balance has only partly compensated. However this is close to how it appeared to the eye, and the moonrise is sympathetic to the colour cast. Four stars are visible on the RAW image, but not here, while a tiny marginal houselight has been edited out. The Nikon D700 mirror does not cover 100% of the frame, so features left out of frame can still turn up in it – but now I am more conscious of avoiding this annoyance.

The vista looks east out to the Pacific and a wide angle lens was a natural choice, as the rocks were quite close. To keep the rising moon undistorted I used a shortish exposure, although normally preferring a smaller aperture for maximum depth of focus. The composition is simple, consisting of just two lines plus the moonbeam, but the textures add sufficient interest. Sadly though, there was no surf breaking because we were on the port’s leeside.

In hinting at life’s daily uncertainties the classical quote has a personal context. This memorable summer evening of boisterous tide and interesting light was followed next day by the devastating Christchurch earthquake of February 22nd. Although we were driving to Christchurch we knew nothing of the quake and suffered no consequences. Had we not been in holiday mode, however, we would have arrived there before the quake struck.