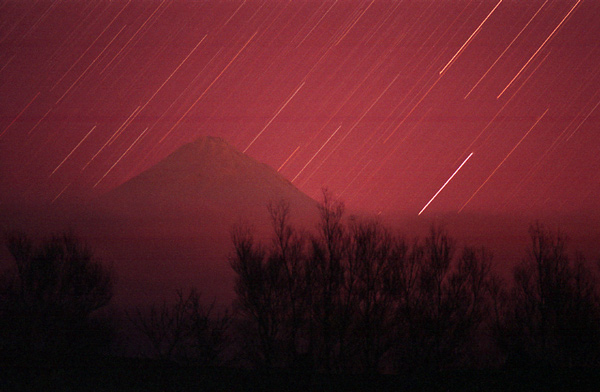 I don’t sing because I’m happy. I’m happy because I sing. – William James

Ratapiko is a small hydro lake near the edge of the Taranaki ring plain, about 40 minutes northeast of New Plymouth, in a quiet country district. Quiet on a winter’s evening at least, as in season Ratapiko is popular for boating and water skiing, but this night our main concern was low cloud and whether the mountain was even in the frame.

The peak could not be discerned through the long Takumar telephoto on the Pentax Spotmatic F, as its maximum aperture is f4. Actually the mountain was hardly visible by eye, and this composition could only be made by referring to a 60-second trial shot on the Lumix LX3 – which does not have a telephoto capability. I then extrapolated a longer exposure (unrecorded) for better star trails and a smaller aperture, to get the best focal depth from the lakeside trees to the mountain.

As often, Mt Taranaki looms above low cloud at 2518 m (8260 ft), in a common composition of vertical and horizontal thirds. The striking red shift is mostly reciprocity failure from such a long exposure on colour negative film (used here in desperation), but looking again at my digital trial shot suggests there is also some light scatter from the nearest towns, Stratford and Inglewood.

The early evening was really dark as the waning moon only rose at bedtime – a good opportunity for star trails, although I expected to see more. Next time I will use a shorter lens, frame this as a vertical and have the trails reflected on the lake, even at some sacrifice of the peak’s prominence in the frame.

Speaking of reflection, the quote from the American philospher is apt for the pause that l-o-n-g exposures enable. Working with two cameras, however, generally means less reflection and instead for me the satisfaction of more activity.