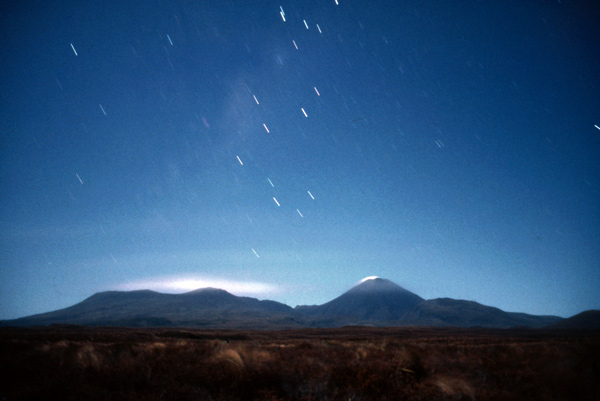 Night-blue signals tungsten film! It was not something I usually shot with, but in my younger days I used whatever film was affordable. To get balanced colour in daylight you had to apply corrective filters, but none were used here, so the blues are intensified. Pre-digital, this was a common trick with advertising photographers shooting wintry subjects, moody nudes or studio noir.

As I’ve said before, moonlight is actually like a warmer daylight when exposed for that effect. Here on a crisp autumn night we are looking east across a wilderness of tussock, from the roadside bounding Tongariro National Park in the central North Island. Ngauruhoe is a young 2291 m (7516 ft) stratovolcano, steeper than it looks here and snow-free for much of the year. It last erupted in the mid 1970s. The massif of Tongariro (1978 m; 6,490 ft) is an older, more complex structure, while the even larger bulk of Ruapehu is out of sight to the right.

The contours on the peaks are visible; I like this especially for the cloud wisps and the star-strokes. The hint of cloud in the middle puzzles me but the fainter stars show the effect of a blue sky better than can the rare sight of Venus in the late afternoon. Only the brightest of stars can compete with a moonlit sky. Conversely, on a moonless night far from urban light sources, a myriad of stars are visible.

Exposure was unrecorded; all film exposures for moonlight are educated guesses beforehand, as the variables are considerable. I generally double the time indicated by a digital trial, to make up for film sensitivity decreasing over long exposures (known as reciprocity failure). The odd thing is that in doing this it takes the same camera-time as a digital shot, which in applying a dark-frame immediately after each long exposure (for noise control) also doubles camera-time.