7. One a.m. and the last house on the street, Waikawa 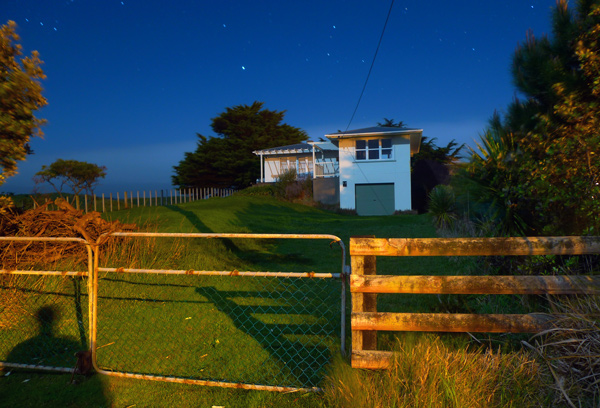 Waikawa is a fairly typical New Zealand beach settlement, not far from Levin, and about as far as Wellingtonians ever want to drive for the weekend. Sodium lamps are sprinkled throughout this well-lit settlement, as it has numerous permanent residents as well as seasonal ones. A letterbox or the lack usually tells the difference, although here the absence of a formed driveway says it all.  This house was handy to where we stayed, it’s a really quiet location and my company had long retired. Personal safety never seemed an issue at Waikawa but my moonlight creativity that weekend was hampered by unsettled weather and a chill southerly.

My shadow seemed a more interesting option than having the tripod shadow in the frame. The problem with the Lumix LX3 used here is the viewfinder does not work in such low light, often requiring several test shots at high ISO to get the framing right. Maximum setting of f2 on the wide angle allowed a low ISO of 100, exposed for one minute. On the Lumix this is close to the limit for noiseless images with good saturation. On Light Balance tungsten was selected to reduce the orange glare of the street light, and this choice can be detected in the blue moonlight filling in the tree-shadow on the house. In photographic terms moonlight is actually pleasantly warm, not cool. Photographers sometimes use tungsten film to render moonlit scenes closer to the way the human eye perceives them.

While street lighting at close proximity is too strong to mix with moonlight, there are opportunities at the fringe, and sometimes the infiltration of quite distant street lighting can be quite surprising. This is simple composition with strong coloration, good lines and a sense of depth, while I believe the shadow adds some piquancy. The image appears as MARCH in my Moonlight Calendar for 2011.