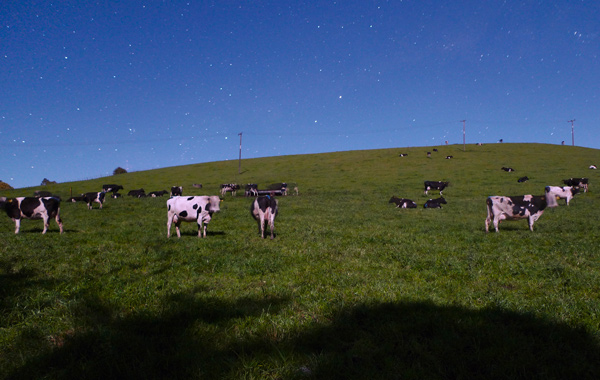 Farm animals make good subjects for moonlight photography precisely because they won’t keep still. Sometimes they hold it remarkably well though, as this placid minute in a cow paddock shows. The two leading beasts twitched their heads, to prove the point that this is indeed a night photo – as if the stars weren’t evidence enough.  With the lens at widest zoom and f2, ISO 200 was the setting. The wide perspective has reduced the star stutter; conversely for maximum star trail effects, a telephoto is more appropriate. Unfortunately, for star effects one minute is neither dot nor trail, but some sort of middling dash.

I chose the slope for its simple ridgeline and because the cows would be nicely placed along it. Often some elevation is needed to give a scene that extra sense of depth and here the rising ground served that purpose. The shadow of the trees behind was steadily dropping as the moon rose, but I wanted this in the frame to make a compositional third; the grass seemed a bit blank otherwise. The water trough was not visible at the time and shows too much in other frames. I liked seeing the stock uncrowded, strip-grazing being so common on Taranaki dairy farms. This photo comes without the incredible sound-track of cattle lowing, blowing, peeing and huffing; a sonic performance that as a townie I would never have imagined.

Featured as NOVEMBER in my Moonlight Calendar for 2011, this shot is taken at the fenceline of a no exit road. I’m not against getting closer but our spontaneous wander down it meant we did not have any landowner’s permission. Country people are suspicious enough of vehicles on their quiet roadsides; staying close to your car allows an immediate explanation. Whatever, a no exit road should reduce the chance of disturbance.

« 7. One a.m. and the last house on the street, Waikawa
9. Late sailing through the Cut, Nelson »