9. Late sailing through the Cut, Nelson 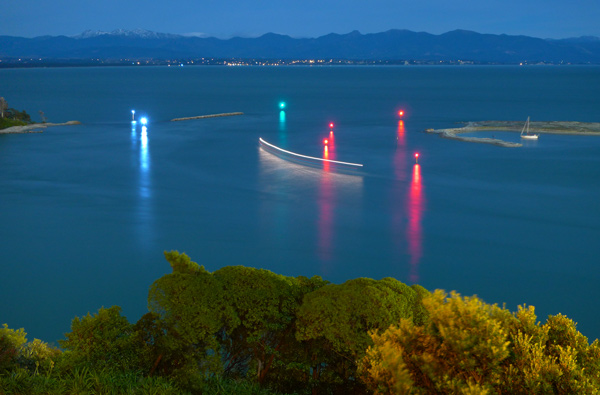 The JUNE image from my Moonlight calendar for 2011. Note the blue of the sea and background, the white boat light and clean sodium fill on the shrubs in the foreground… all signs of a tungsten setting. Tungsten refers to filament lighting, so this answers the orange cast of most street and home lighting. Tungsten also adds a coolness to moonlight which is in tune with our actual perceptions, although moonlight is basically golden sunlight –  reflected sunshine that hits us less than 2 seconds after bouncing off the moon. The moon’s warmth changes with its elevation in the sky, the same as with sunlight. Moonlight warms conspicuously when the moon is closer to the horizon, when its angle of strike through the atmosphere is more oblique.

The Cut is a passage dredged 100 years ago in the Boulder Bank, an impressive natural breakwater. Port Nelson is nearby and other, bigger boats came through the Cut that evening, but none described an arc as simple as this fishing boat’s, in a minute exposure at f2.8 and 200 ISO. Two minutes would give a better effect but longer exposures aren’t possible on the Lumix LX3; while it has a generous 60 second setting (hard to find on more sophisticated cameras), there is no B setting, for time exposure.

I checked my file sequence to confirm the boat was going out, not coming in. Tasman Bay is quite sheltered and the lack of swell is evident in the even curve of the light (no squiggles), although there’s minor movement of the distant yacht on the high tide.  Other movement is visible from the breeze in the greenery, but not the flashing of the harbour lights. Background lights are those of Mapua. Some foreground was unavoidable from the only vantage point available on the cliff above, but I believe it adds some sense of depth all the same.