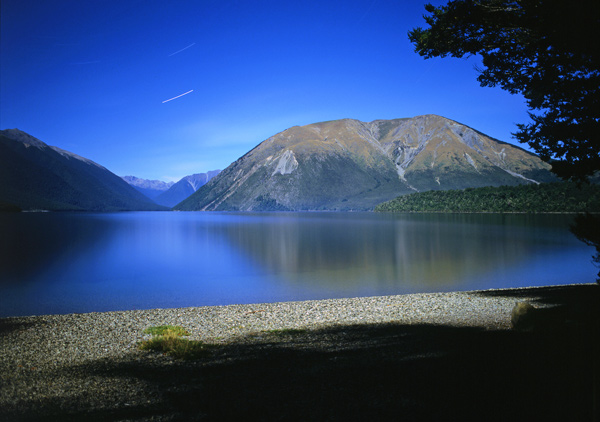 An autumn view looking south. Situated in the northern South Island, Rotoiti is the park’s leading gem. I didn’t set out to compose this in thirds, and its not quite so anyway, but this shot consistently gets good reactions and perhaps because of its traditional composition.

However the most recent comment related to the light; someone familiar with this scene by daylight remarked that he had never before seen the light so even on Mt Robert, whose slopes are conspicuous. Moonlight is not as harsh as sunlight, being warmer for a start, and the long exposure may have some bearing on this, with the slow arc of the moon softening any shadow edges.

Of course my friend had never seen the star trails either, a pair which conveniently occupy a pleasantly blue but otherwise fairly blank sky… no doubt there would be more stars visible on a moonless night. Blue skies in my moonlight photos surprise people but I once glimpsed this high in the heavens in real time, as patches of blue showing up amongst great masses of luminous cloud. An odd but awesome phenomenon.

In this photo there’s some cloud movement, and a breeze to shimmer the reflection on the lake. The shadows add a sense of depth but are really too black, and I see some vignetting in the sky to the left. With long exposures, particularly of half an hour or more, you never know what you’ll get. Using film adds the further uncertainty of reciprocity effects, when light sensitivity slows up and colour shifts can happen,. Here, however, there’s no obvious shift, unlike the magenta cast notorious in earlier years with Kodak film.

Time and timing were unrecorded but this took around 30 – 40 minutes on Fujichrome, using the Pentax 6×7 with the 55mm wide angle lens wide open at f4. This is the JULY image in my Moonlight calendar for 2011.