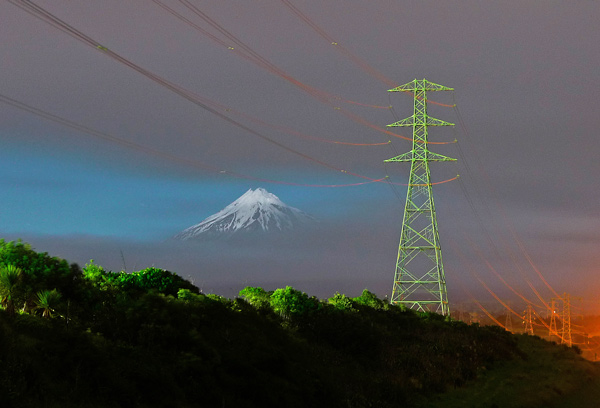 The last shot possible that evening, as low cloud rolled in to obscure Mt Taranaki and the moon itself. Exposed to the prevailing westerlies, this region has highly changeable weather and many a moonlit evening is lost to incoming cloud and rain… Actually I should have nailed this view earlier that night, but I spent too long looking the other way, out to sea and out of sight of this. It’s taken at f2.8 for 60 seconds, at 200 ISO, and shines as the MAY pic in my Taranaki: the Mountain, by day and night calendar for 2011.

This is unusual firstly for the peek-a-boo moonlit mountain; secondly the even balance of lighting on both peak and pylons; thirdly it’s a major crop from a Lumix LX3, a desperate manoeuvre when a standard lens just won’t pull the scene in. The balance of light values is luck rather than design, helped by the snow still around in late spring. Taranaki is an awesome sight by full moon, but it’s visibility depends on the reflective power of a good snow cover. Over late summer and autumn, when it is bare, the moonlit peak is less conspicuous and sometimes I have to do trial exposures from home to see if it’s really mountain or just cloud on the southern horizon.

Paritutu strictly refers to a volcanic outcrop behind the port, some 153 m high (500 ft), but this shot is taken nearby, at road level. The floodlight from the left is from the Dow chemical plant, the sodium glare on the right from the tank farm.  The march of pylons comes from a decommissioned power plant at the port. All in all, quite an industrial setting for Paritutu Centennial Park, yet the park came first (1940). It includes the Sugar Loaves, volcanic remnants quite distinctive to our coast, which north of Kapiti is otherwise entirely island-free .