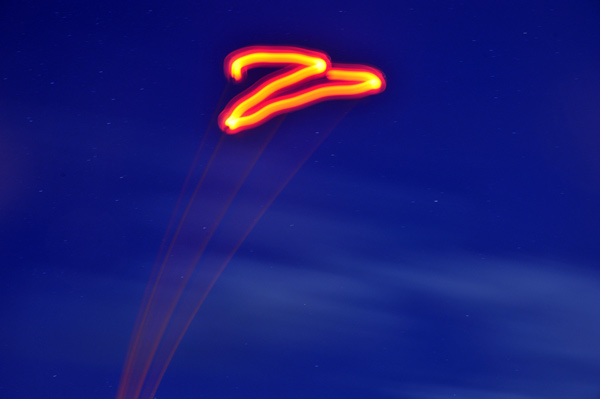 The ceaseless winds of a Taranaki spring have just one benefit for long exposure camerawork – they create more moving subjects to photograph. Here moonlit clouds provide an unusual, fast-moving background to the foreshore wind-wand, itself in continuous motion. A kinetic sculpture by Len Lye, the wind-wand is the centrepiece of the coastal walkway. A red light on the tip of the wand demonstrates its sinuous movement in this photo, taken last night from the plaza of Puke Ariki (Taranaki museum) under a peekaboo moon. I had noted the location earlier in the day, and as it happened, not many other locations were workable when the moon was up because of the strong, cold southwesterly blowing over the province.

Not being a complete ill-wind, it “blows somebody good” in this 30-second exposure at f10, ISO 1000, through an 85mm lens. The light balance was set to my city-night favourite, tungsten. This setting has deepened the sky blue considerably, while fanning out the light at the wand’s business end to feature a more attractive yellow.

That the tungsten app is little known to non-commercial photographers is clear from a recent American book on night photography, in which I could find no reference to it. Tungsten is not a match for all artificial lighting however, as flash lighting, mercury vapour and even some torch bulbs are closer to daylight in their colour temperature (white balance). On the other hand, tungsten is a good choice when faced with the orange glare of sodium street lighting.

The stars are not conspicuous in this image; next time 5 or 10 minutes should bring them out more, although star trails would create quite a different effect, and longer times will disperse the cloud shapes. As the wand is lit by the ambient city, moonlight plays only a minor role here, but the clouds would not be visible without it.