24. The rock Paritutu at night 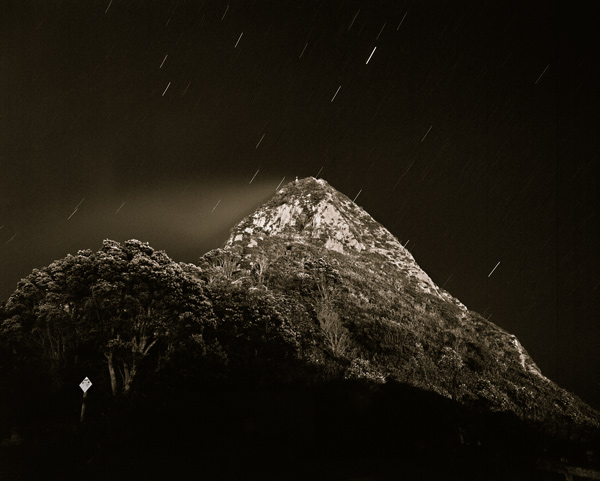 The 7.30pm time slot is only approximate, as you are looking at a 20 minute experience. The night was close to new moon, so this cannot possibly be by moonlight (for a change) but instead the illumination is from the working lights of Port Taranaki, well below the viewpoint here.

This wide angle shot on the 6×7 Pentax was recorded on HP5 film, ISO 400. I neglected to note f-stop (probably f8) but the exposure was calculated after a quick trial with a digital camera at higher settings, then doubled to allow for reciprocity slow-down. Twenty minutes was enough for good star trails, I thought, however they are only starting to look interesting. Must have forgotten that wide angle lenses minimise star movement; telephotos maximise them. Their slight curve above suggests the view is to the southwest, as to our eyes the stars revolve around the South Pole.

Thin low cloud was billowing over the summit but it was hard to tell how it would show up. Another variable was how panochromatic film would respond to the fairly orange light, in a long exposure – actually no problem. Framing was awkward wide open at f4, as not enough light was transmitted for the viewfinder.

While the shutter was open I hoped a car would not drive into the carpark, which so far I’d had to myself. Wouldn’t the sweep of headlights overpower the foreground? Really I need not have worried, and in any event such intrusions sometimes add interest in unexpected  ways. The perspective does not convey the scale of this volcanic remnant, but the sign at bottom left might help… I couldn’t leave it out anyway. A staircase and then a safety chain takes you to the 153m summit, where a trig point is just visible, and a great view. In pre-European days it had a Maori palisade. It would have been a very windy place of refuge.