44. Moonrise from the Devonport ferry, Auckland 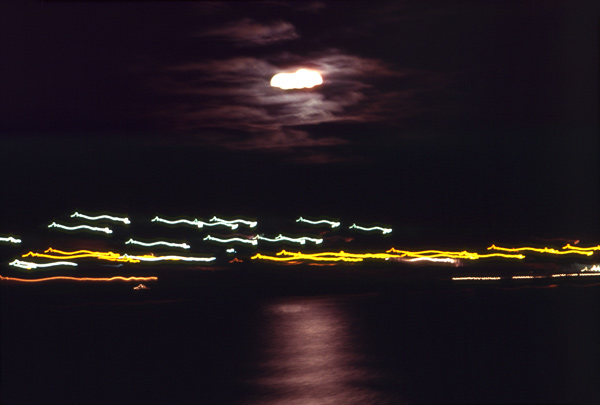 Moonrise from the Devonport ferry. 1 February 1980

This scene capped a great summer’s evening, and an entire slide film. First up was a moonrise over Rangitoto (Auckland’s youngest volcanic cone, in the Hauraki Gulf) from Cheltenham Beach, complete with kids frolicking in the surf… then a series from the open deck of the ferry. The bright idea of setting up the tripod there was probably by way of light relief after a few anxious moments beforehand, when it looked as if we might miss the the last ferry back to the city.

As the boat pulled away from the wharf, I thought the movement over the water could deliver some unusual effects from the waterfront lights. Judging exposure was simply guesswork, but each frame was in the vicinity of 10 to 30 seconds, around f8 as I recall.  Composition was no problem through the Pentax viewfinder and the standard f1.4 Takumar lens. The apparent size of the moon is not due to a long telephoto but simply an elongation caused by the movement (to left of frame) of the ferry, on its diagonal course for the opposite shore.

The film was Ektachrome 64 – guess the ISO – and it cost me $2.50! I always kept an eye on the phases of the moon, and as the evening looked promising I took the trouble to lug a tripod along – despite being on foot. However even today, when I know full well that unusual results so often require unusual effort, I find tripod-carrying a chore, and don’t always take one with me on shorter, “fun” outings.

Needless to say, night photography hinges on a tripod. Fenceposts, little beanbags, mini-tripods and obliging rocks will only take you so far… to contemplate anything more than the most casual of photography by extended exposure, a tripod is essential. I recommend something solid, with a quick-release plate for loading the camera. The legs should be easily adjusted and the head should move without fusswork. And be warned – plastic wears out quickly.