61. Wairakei geothermal from the highway, Taupo 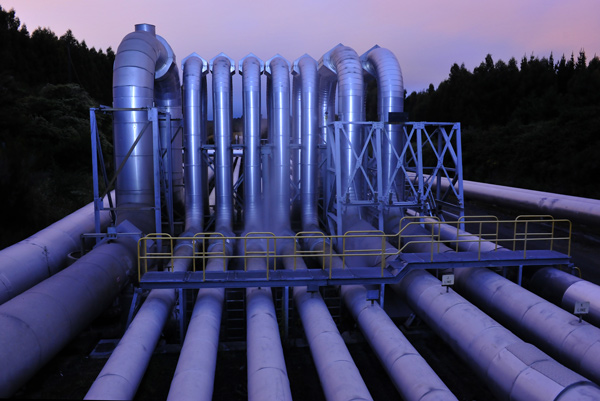 The main highway north of Taupo crosses a futuristic nightmare, a mass of hissing pipes and pallid infrastructure related to the nearby Wairakei power station. By the ordinary light of day this hardware is hard to redeem, but it’s easy to add interest at twilight – especially with an LED torch. This tiny wonder was fresh in my hands as a seasonal gift from our printer. It was a joy to wave about, for my simple mind at least.

The Nikon D7oo was set off for numerous short intervals, to the stoccato soundtrack of steam from the pipe sphincters, and the frequent rumble of heavy trucks and holiday traffic.  Each time, I beamed the torch in casual circles over the upright pipes to supplement the deepening twilight. Approaching headlights were only a minor problem, but the vehicles then shook the bridge; the vibrations went straight up the tripod. For this wide angle view (28mm; 20 seconds@f8/ISO 2000) two legs – not mine – were put through the railings to keep the top rail out of the frame, as the bridge crosses at a diagonal.

Picture control was on Vivid, an obvious choice for the flat light of drizzly nightfall. On the Nikon you have to remember to change Vivid back to Standard before your next hyper-sunny scene. Colour temperature was Daylight, but judging by the magenta cast, it is not quite. The LED torch mixes well with a daylight setting as it has a very cool beam.

This type of composition is undemanding for focus, and f8 easily copes with it, but there’s another problem creeping in for me – lack of a level frame. True, my tripod head has a spirit bubble waiting to be checked, so this is clearly what’s known as an operator problem. According to Ken Rockwell’s maxim, “Most cameras are more intelligent than their owners”, this must be a common thing.