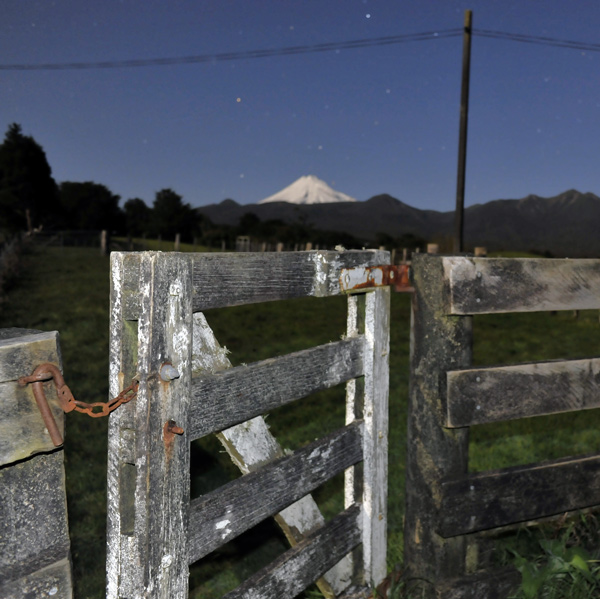 More experimentation with fill-in flash on a moonlit spring night in Taranaki. The almost ghostly gate shows everything filled in here, so it’s really more of a case of moonlight filling in the background to the desired degree, and here it is sky & peak. It is not difficult to balance the two light sources, or to favour one or the other, but adjusting for flash is unrelated to long shutter speeds. Instead the moonlight photographer changes the illumination either by way of ISO or distance from the foreground interest.

Flash gives a stark light, especially straight off the camera, and I’ve never been a great fan of it. Combined with a long exposure, however, some creative possibilities develop, particularly those showing movement. In the bottom right corner, for instance, a sharper image of clover merges with a second one formed by moonlight – but blurred by the wind.

The 8 second exposure required only f5.6, on ISO 2000. For a sharper background f11 for 30 seconds would have been better, but this equivalent exposure would then show some star movement. In this 28mm wide angle shot the shorter time actually used has  blurred the stars – but stilled them.

The square frame is divided into classic thirds. It tightens the original 2:3 format very well, and I like the colour range and rusty highlights. The tripod was positioned to obscure the fenceline beyond, while the fencepost and power pole were consciously aligned. The original high contrast has been moderated in post-processing.

Distant Mt Taranaki has some fresh snow, but most of the mountain is hidden by the Pouakai Range. Koru is a farming district near Oakura; for Sunday drivers Koru Road is a glorious glide down to the coast. However other folk use the road as a racetrack, reinforcing my belief that a safe park well away from traffic is the first requirement when you are out on location. To be worry-free certainly helps your enjoyment of moonlight photography.

« 70. Rapids at the tidal limit, by moonlight
72. No exit at Waikawa Beach, Horowhenua »