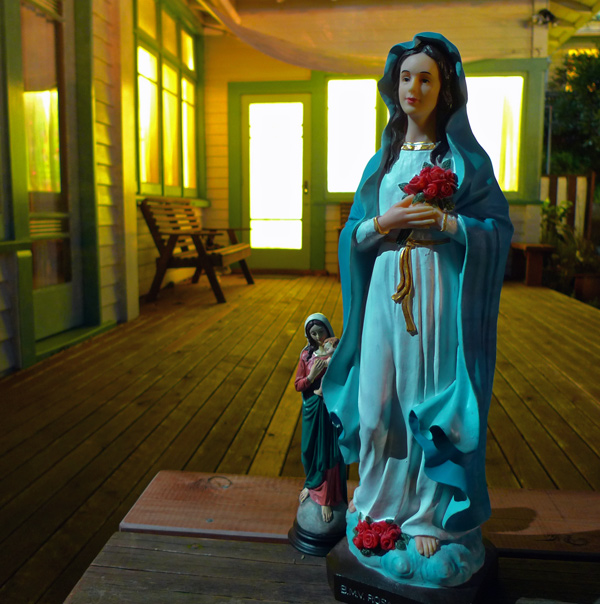 Here’s the female form in another light entirely – although still moonlight photography.  Once again there’s a mix of moonlight and incandescent light, but in reverse to no. 76, Moonrise at Long Bay. The foreground above is moonlight, the background household tungsten. The moonlight only balances (more or less) with the stronger artificial light because it has filtered through blinds on the windows and door. However, at the time the houselights seemed a bare glimmer.

As a companion to no. 27, St Mary’s evening vigil, this is a more congenial domestic environment. The figurines come from Bangkok, from a Catholic supplies shop not listed in the tourist literature. In a Thai household shrine these statuettes would be tended with garlands and other offerings, but their post here was a private visit, and only transitory.

The house was supplied by Derek and Claire (with thanks). Only at 11pm had the moon moved far enough around the two storeys to light this scene. Being a winter moon it was high in the sky, yet the Holy Mothers lack the summery look that the solar equivalent would give in January. Exposure was f2 for 60 seconds, at ISO 200, on the Lumix LX3, with the zoom at its widest.

For me the appeal here is in the offbeat contrast between the fluid lines of the blue and red figures and the more angular forms of yellow, green and brown. The angles give a strong sense of perspective, although a limited focus is noted on the close-up at f2, even with a very wide angle. Tungsten light balance was not used.

The square format suits this frame very well, and improves the original 3:2 composition. But starting out with square format is not easy, as I found with my old 6×6 cameras. Effective framing took a lot more effort than did the standard rectangle of the Pentax. The 6×7 compromise adopted by Asahi Pentax for their medium-format SLR was a considerable success.