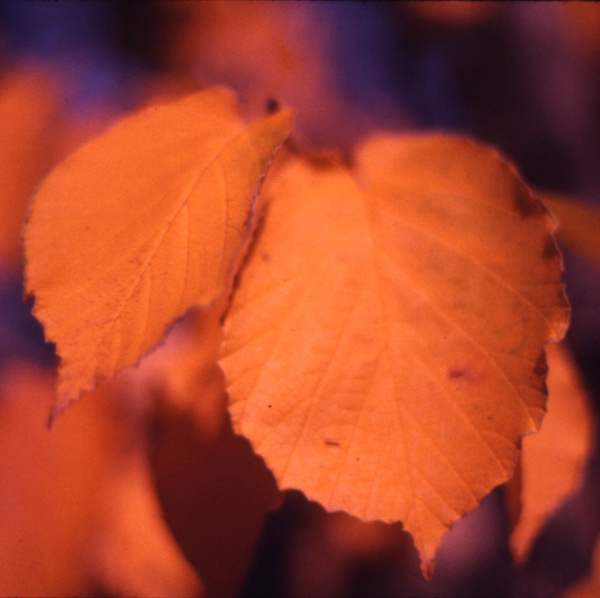 This image is the Technicolor companion to no. 42. Neudorf apples by moonlight, shown in my previous series of square format moonlight photography. Taken the same night in the same Nelson orchard, the colours are quite reminiscent of the 1950s, as the colour shift on Kodachrome 25 has not been corrected.

The shift does not relate to ageing of the transparency, although that might happen yet. Instead the orange and magenta cast is due to reciprocity failure, the result of an 8 minute (approx) exposure, which the film was not designed for. Kodak films show a marked magenta bias with the long shutters needed for moonlight. Full correction in Photoshop has proved possible, but I prefer the greater impact of the original. The square framing has, however, enhanced it.

Using ISO 25 by moonlight is the slow work of saints (present company excepted). Shot after shot, a patience is required that’s now even harder to find in the 21st century. The fine grain results require l-o-n-g exposures with only shallow depths of field, using wide-open apertures. Here with the Pentax Takumar standard lens set on f1.4 some sharpness has been achieved, fortunately on a very still night.

The background blur is called bokeh, and variations in it from different apertures and lenses are now assessed as you would judge a good wine. For better focus I could perhaps have used f8 – and gone back inside for 4 hours, as the tree was handy to Jane’s cottage – but over several hours there’s a much higher risk of the lens fogging, a breeze getting up or an orchard vehicle coming by.

As much as I appreciated the fact that care and patience would deliver some possibly stunning results, other creative opportunities by the full moon would not be stifled. What also held me back was my belief that there are few places where you can safely leave your gear “at work” for 4 hours unattended.