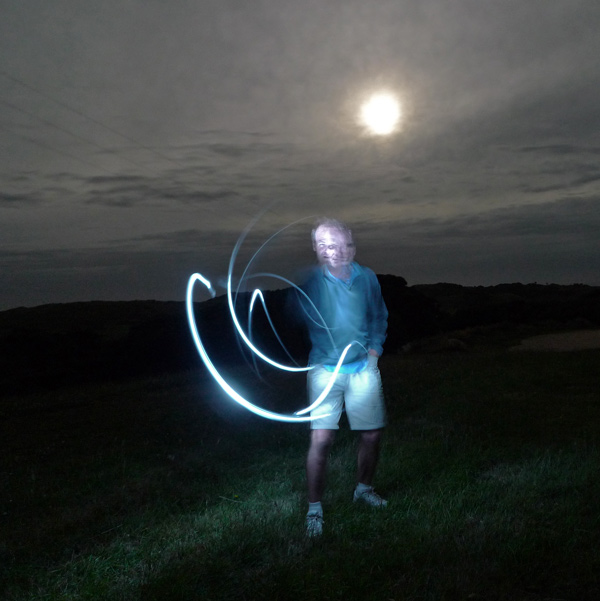 Here’s a bit of fun, on a hilltop overlooking Farewell Spit at the top of the South Island. You can have some good, creative fun when you are out with a camera and tripod at night. Sure it’s wholesome, legal and involves exercise in the fresh outdoors – but as Keith Richards might say, it ain’t all bad, despite this.

After dark Richard and I walked over the bridge at Puponga and up the hill. It was too overcast for actual moonlight photography, as the high ISOs needed by the Lumix LX3 gave such marginal results – yet the moon was well up and fairly full. On such summery after-moons, when the waning moon rises in the night, you either stay outdoors soaking up the ambience, or you head out well after sundown.

This shot was taken 90 minutes after sunset, at f2 and 10 seconds, on ISO 200 and with the zoom at widest. The grass detail helps to locate and add depth to the photo, but the shutter was not long enough for much else in the landscape. It’s fine for the sky and the torchbearer though. Waving the torch through three arcs has lit Richard’s face in corresponding fractures. You can tell from the cool flesh tones that the torch was an LED one; with a filament bulb I would have tried the tungsten setting as well.

So you don’t have to wield the torch yourself – let your friends brandish it. Extending the shutter time and moving Richard from spot to spot would have developed this theme nicely, but alas, I took back the torch and followed just the spot-to-spot part. Squaring the original has improved it, by deleting the empty wings (left and right) of the wide stage, a common surplus when your frame features just a single subject.

Two’s good company on these capers. Even if your companion is 50 metres away with his own camera and moonlit absorption, the company makes a difference.