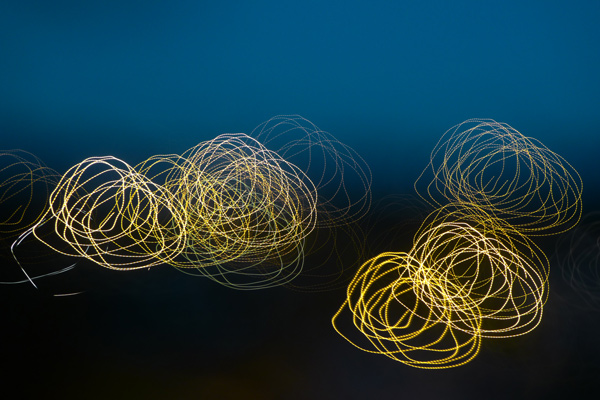 This is something from the far corner of my photo arena, but it’s a follow-on to my previous posts. Entirely experimental, it results from an outing on foot for which I took two cameras but only one tripod. While the Pentax 6×7 was taking long exposures of a cloudy mountain in the gathering twilight, I played around with the Lumix LX3, just to pass the time. Using 10 seconds and f2.8, I hand-held the camera, moving it in slow circles while aiming at the distant headlights. ISO was a low 100 and the zoom was furthest out – only a meagre 60mm in film terms.

Much of New Plymouth is laid out in a spoke-and-hub fashion, chiefly along the ridgetops. Here the traffic winds down sinuous Waimea Road, one of the few routes to traverse the city’s hills and dales. The horizon is still visible; the sky is featureless but three colours enliven the frame. It’s intriguing that the light lines are mainly broken into dots, yet are fluid elsewhere. How many cars are here?? Just two, I think, but what of the street lamps? I suspect they had not yet come on.

One of the main interests for me in long exposure and night photography is how movement is captured, but always with the camera as a fixed viewpoint. Only with no. 44, Moonrise from the Devonport ferry, is the camera moving – on deck, along with the tripod. Here, however, is the uncommon result of both moving camera and moving subject matter. The lights do not show the blur you associate with camera shake, and I suspect that the steady circular motion explains this.

A late twilight so close to the equinox is the result of continuing daylight saving, which in 2007 was extended into early April. As New Zealand standard time is already fixed permanently at 30 minutes ahead of its natural position, for 27 weeks of the year we are 90 minutes ahead of ourselves.