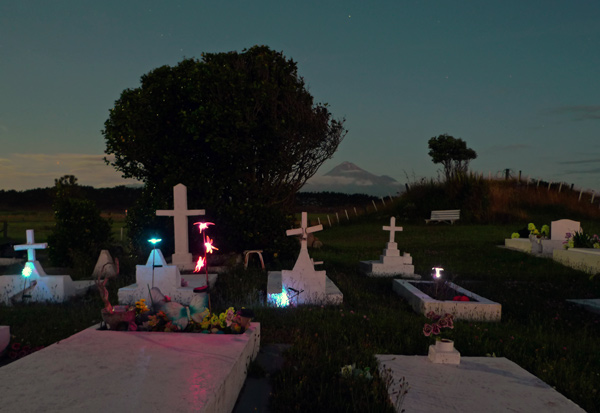 We had visited this small country graveyard near Rahotu much earlier in the day, and were now on the homeward drive. The unusual twinkling lights were quite eye-catching from the highway, so after parking in the side road I set off across a few hundred metres of paddock in the deepening twilight, intending to get a few photos by the rising moon. My womenfolk refused to get out of the car for this one, but I couldn’t really blame them as we were all pleasantly tired after a good summer’s outing. Either way I would have little time for camerawork.

The cemetery had a great sense of peace as night descended. Photographically the light was unusual, being really a mix of moonlight and twilight, as f2.2 and 20 seconds at ISO 80 would suggest to any cognescenti. Lately I have paid more attention to the short interval during which moonlight and the last light of day harmonise. Typically it’s really too dim for us to take in the resulting twin-lit landscape but the camera sensor picks up on this highly unusual effect. It can be seen above on the right side of the frame, where the edges of the graves are lit both ways.

The zoom was not quite at widest – 28mm in full frame terms – on the Lumix LX3. The mountain was almost bare of snow and ice, as it is in late summer. The white graves and the moving lights indicated a Maori graveyard, while the presence of farewell goods on some graves was an unusual sight to us Pakeha. You tend to think of cemeteries as unchanging places but a few months later when I came back at sunset I was surprised at the work in progress, giving improved access and fencing off the tapu ground more adequately.

The cemetery occupies two adjoining knolls and I hope one day to channel Ansel Adams from one of them. However I suspect another 30 years of preparation are in order. As well as some perfect timing.