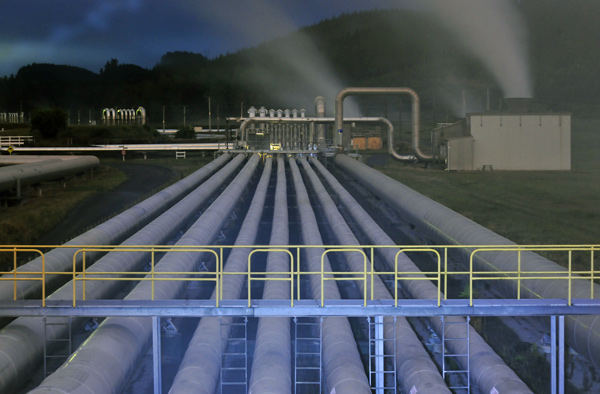 This image is a companion to no. 61, Wairakei geothermal from the highway; it was taken ten minutes later from the other side of the bridge. I took some photos from the same place nearly 30 years ago, and on retreiving the slides I see the main change is the presence of the gantry in the foreground, interrupting the converging perspective of the pipes.

The yellow and metallic blue add to the new palette presented in this 30 second image, taken at f8 on the 85mm Nikon telephoto lens. The ISO was my usual for twilight and moonlight photography: 2000. Picture control was set to Vivid – high contrast, in other words. (Vivid is, by the way, a good default for almost everything you ever want to photograph, with one major exception: people. For portraits Vivid will have you lynched by your subjects as soon as they see the results. You have been warned.)

The exposure blurs the clouds of steam nicely; their direction of movement indicates northerly weather if you are a local. There was plenty of steam drift from this spot, but it shows in this frame only as an odd softness over the foreground, where highlights have been added by hand with a small but powerful LED torch.

The cloud cover is lit not only by the last of the day but also a rising full moon, one which unfortunately I never caught a glimpse of the entire evening. The grass showing in the twilight surprises me; there’s also enough light to balance with the more distant pipes in their nightly artificial illumination, just underway. Any later in the twilight this artificial light would overwhelm the residual skylight.

New Zealand’s geothermal programme began with Wairakei in 1958, when it was only the second large-scale power plant in the world. After a long hiatus several large geothermal schemes are now in hand for the area. There’s definitely no shortage of heat energy under the volcanic plateau.