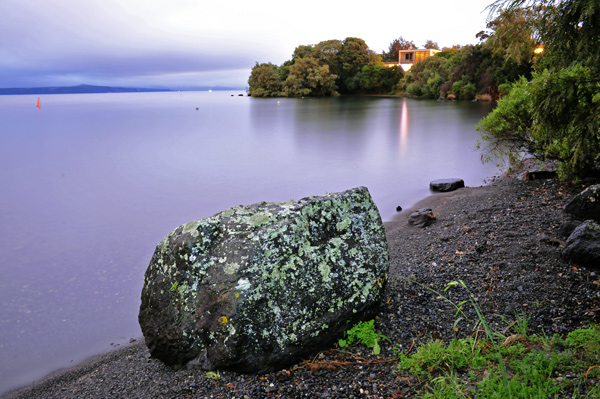 Although the lighting looks fairly natural here it actually wasn’t, as during the 2-minute exposure I shone a small LED torch over the foreground rock. In this case the torchlight was a close match to the departing daylight in colour temperature, and my sense of how long to move the torchlight over the lichen was accurate – so I got the natural effect I wanted.

Selecting f11 on the Nikon 28mm wide angle gave the desired depth of focus, and this was set using the depth of field bracket marks on the lens. If you definitely want a sharp horizon then allow an extra stop at that bracket end, but wide angles are generally forgiving of critical-focus. Even at 2000 ISO, f11 required 122  seconds of shutter. I counted them out as I waved the torch around. My electronic cable release is just the basic model, having a button to lock the shutter open but no timing mechanism. It’s price new was outrageous even so, and appeared to bear no relation to the low cost of materials, given the cheapness of non-branded electrical items these days.

Colour temperature was set to Cloudy, and Vivid was chosen for contrast. It was a drizzly night and an umbrella hovered over my gear for much of it, however this was a quiet and sheltered spot which felt secure to work from. Most of the houses nearby are holiday homes, largely unoccupied even the week before Christmas; the lakefront is public reserve, undeveloped but quite accessible.

There’s a minor sense of time passing in the drifting cloud and in the tiny surf on the lake, caused by a persistent northerly; the telephoto from this point showed the distant buoys bobbing. A street lamp reflects off a more distant rock while the apparently autumnal glow on the trees to the left of the house also comes from sodium lighting. To mention more lasting things, the boulder is likely a volcanic bomb ejected in the last Taupo eruption, around 200 AD.